In a statement concerning Workingman’s Death you said, «Work is often difficult to see, and therefore difficult to depict. Physical labor is probably the only real kind of work.” What is real work? The work done by a filmmaker is invisible too.

MICHAEL GLAWOGGER:  Physical labor can be made visible. You can show someone carrying something, using a shovel, mining coal, but it’s hard to make someone sitting in an office thinking obvious as work. Compared to hard physical labor, filmmaking isn’t really work, and it can’t really be made visible in a meaningful way. That’s a provocative theory, and it goes back to the fact that our parents drummed it into our heads that you have to do “serious” work to make something of yourself. Physical labor is highly esteemed in the postwar generation’s society. I remember that, for me, the fact that I didn’t do any kind of work involving physical effort almost gave me a bad conscience. At least I’ve never had the feeling that I really work.

Placing the theme of physical labor in a global context is extremely complex and surely required a great deal of preparation. How did you approach this theme?

MICHAEL GLAWOGGER:  One aspect that interested me a great deal during preparations was the question of how physical labor can be depicted. I also watched various old documentaries and fiction films about workers or their heroism and realized that the work itself was almost never shown. Even in newsreels that were merely intended to idolize workers, the actual labor process was nearly always absent. Work was interesting only as a way to introduce the worker, who in fact served in the classic worker film as an ideological vehicle. In contrast I’ve always been interested in making physical labor itself the subject of a film, and by means of this sensual experience determine its social and political position.

The first episode is entitled “Heroes” what’s this “heroism” of Ukrainian workers based on?

MICHAEL GLAWOGGER: The motivation for using Ukraine was definitely the myth of Alexei Stachanov. He was a model worker who, in a single shift, mined the then incredible amount of 120 metric tons of coal with a jackhammer, and for that reason he was made a national hero and celebrated like a pop star. There were similar worker heroes in all Communist countries, they served as a point of departure for my research. Beginning with Stachanov in Ukraine, I began to do the research. This took me to the Don Pass, which I realized was the world’s mining region, and then I saw the unbelievable conditions the people there live in today. They were thrown back from this high status to the mining methods used by their great-grandfathers. That’s an example of how work can become invisible though it’s still there, representing precisely what my film’s about: the fact that hard physical labor, although it’s invisible to society, becomes visible again and again. Even if its presence is increasingly denied here in Austria.

How difficult was obtaining shooting permits?

MICHAEL GLAWOGGER:  That varied a great deal. Ukraine’s full of mines, and because of the downfall of the mining industry a more or less lawless zone has come into being. The topic of ships being dismantled was very delicate because of the controversy stemming from its effect on the environment. In total there were three places where this kind of work is performed, one’s in Alang, India, the second is in Chittagong, Bangladesh, and there’s another?which is dying, so to speak?in Pakistan. I decided to use the one being shut down because it’s the most fitting for my theme. Obtaining shooting permits primarily meant being stubborn. In Pakistan my whole team had arrived and by the first scheduled day of shooting I still didn’t have a piece of paper in hand. But then they finally signed in light of the fact that we had traveled so far. Shooting in Nigeria just happened because of the situation there and wasn’t really planned. Originally I wanted to shoot on a drilling derrick, but getting the permit from Shell took too long, and while waiting outside the Shell offices I saw the vultures flying over the city and investigated that. And after seeing this market where animals were slaughtered I no longer cared about getting Shell to sign the piece of paper.

On the one hand we see people in their daily struggle to survive, how hard work determines their day. How important and how possible was it to connect with them as people?

MICHAEL GLAWOGGER: It’s wonderfully possible, it just took on different forms. Somehow it works differently in different countries and the people approach you in different ways. Not only in a language sense, but culturally too. Going to Ukraine as an Austrian is different than being a white in Nigeria. The people there are astounded at our presence and our reason for coming. There the children point at you and shout, “Ojibo! Ojibo!” (“white man”). It’s exciting to experience first-hand that the color of your skin has such an effect. Even the Pakistanis are very approachable and were prepared to open their private spheres. I filmed in a village in northern Pakistan, but when you enter a home as a stranger there, the women are hidden. In other words the house is open to you, but for the shoot I was confronted with a false situation because the women were sent out of the house. Then we had to stop shooting due to a rumor going around that we had filmed a woman. At the shipyard even the private sphere is much different. There weren’t any women there at all. The men present themselves in a relaxed way, they allow themselves to be filmed in every situation, whether they’re cooking, reading from the Koran, playing with their pets or walking the streets hand in hand.

The violence work involves, the way it affects the human body, is juxtaposed with unbelievably powerful images in this film. Why is this esthetic aspect in the world of hard work?

MICHAEL GLAWOGGER:  That aspect is often addressed with regard to my films, and it’s something I don’t really understand. Images I would merely term precise are always called esthetic. You could say that just because I’m not sloppy when filming doesn’t mean that I estheticize something. We’ve become used to shooting on film and taking the time to do it. I think out a concept for each part, about how something can be depicted, such as when I follow the path of a sulfur miner. This path begins in a volcano at a semi-mythical place, the smoke underlines this atmosphere, and then the “new world” enters step by step. The workers trudge with their baskets full of sulfur from the crater to the weighing station, that’s a path from A to B, a complete transformation of the location and the subject. In Nigeria on the other hand, the various kinds of work are performed in a constant cycle. The cows and goats are driven in, slaughtered, skinned, washed, the meat is cut up and carried to the trunks of the customers’ cars. This constant cyclical movement is totally different than the path from A to B at the sulfur mountain. I try to follow such movements and think about fitting images. These considerations dominate a formal intention or a design of the images. The reality itself then sometimes leads you to things that are almost poetic. In Pakistan the visual grammar is defined by the fact that the workers never for a second moved quickly, though a huge ship was gone in a month. I wondered how that was possible. How can I depict it, the fact that everybody here works in an unbelievably relaxed manner, with faith in God, in a brotherly atmosphere, performing incredibly hard work which is invisible to me. This takes me back to my original question, of how to depict work, what makes it visible. Does it disappear?

The locations you chose are very extreme, extreme for the people who earn their daily bread there, and also extreme for the film crew, which surely had its own limitations to overcome.

MICHAEL GLAWOGGER:  When your intention is depicting extreme physical labor, you must confront it in some way. My cameraman often tried to perform these kinds of work himself before realizing the best way to approach it. For the most part you aren’t able to do most of these kinds of work. We can’t carry a 100-kilo basket, you have to stop after 30 meters. But to an extent you can understand why it progresses so slowly and why it’s so precise. Of course in Ukraine that meant for us entering a mine shaft that was 40 centimeters high, in a seam 100 to 150 meters underground, and of course you have a sense of panic at first that has to be overcome. But I want to stay away from that and not place too much importance on adventure stories. The main thing here is the workers’ heroism and not that of the film crew.

The value placed on physical labor has obviously changed. There’s a dramatic break in the fifth episode, after which work as such is no longer depicted.

MICHAEL GLAWOGGER: This takes us back to the beginning of the interview. Physical labor and faith in the future were incredibly important to the postwar generation, and I found the same thing in contemporary China. When you listen to the workers there, they say we don’t use just physical strength to do this anymore, we do it with our brains and a great deal of efficiency. We’re moving forward, the future belongs to us, we’ll produce even more steel, China will do it. In light of the look I’ve taken at the world, what the Chinese are saying can’t work the way they expect. For that reason I conclude it in the epilogue, where it probably will have to end?at an amusement park with colorful lights. Duisburg-Meiderich is a model amusement park. This is a place where the great faith in industry, where the huge sites where hard physical labor is performed will disappear, or already have to an extent.

Is work ceasing to be an important element of human dignity?

MICHAEL GLAWOGGER:  Has it even been? Pride might have been more important. You could be proud after mining coal because it would be used to heat a school. But that was pride with added value for society. Today work with dignity sounds almost abstract. Dignity must involve added value. I think that the alienation factor, with regard to physical labor, is now greater than ever these days. It might affect the laborer at the sulfur mountain the least. He extracts sulfur from the mountain, carries it down, gets money for it so he can go into the valley and buy a wife. This makes him happy, and he’s still happy when he goes up the mountain the next day. He certainly doesn’t know what the sulfur’s used for. The value and the individual’s self-worth in society definitely has a great deal to do with obtaining purchasing power?everywhere, whether the sulfur miner uses it for a prostitute, or the Pakistani brings money home. The question is what happens to us when the value systems break down, which is almost foreseeable. 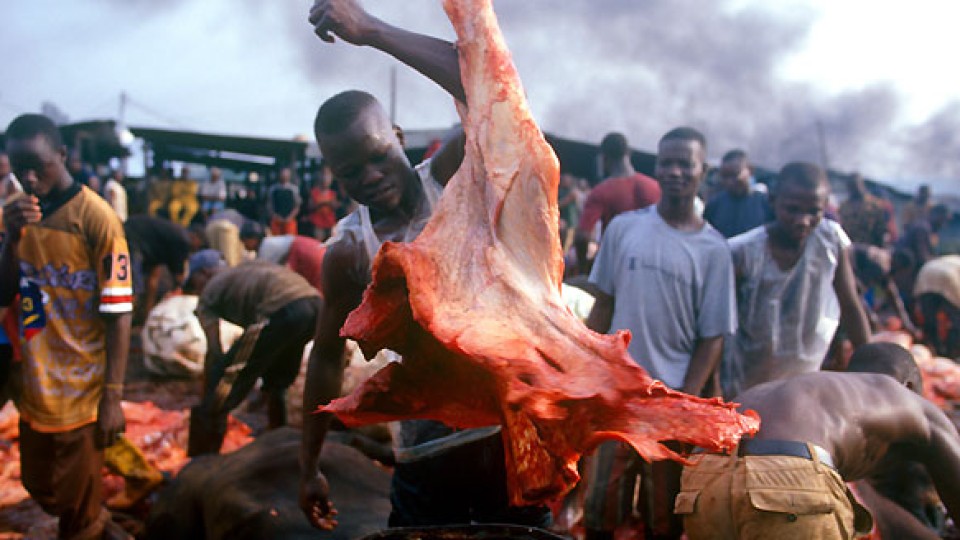 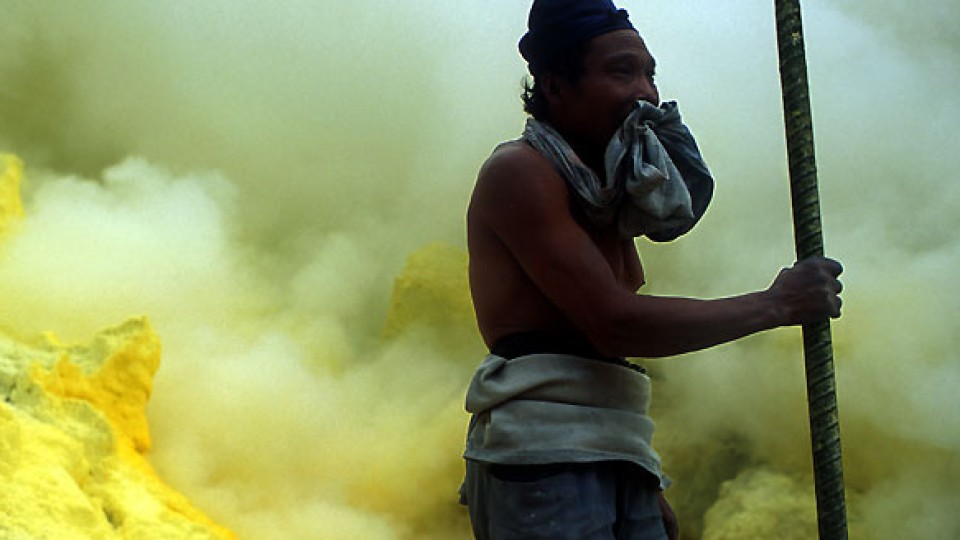 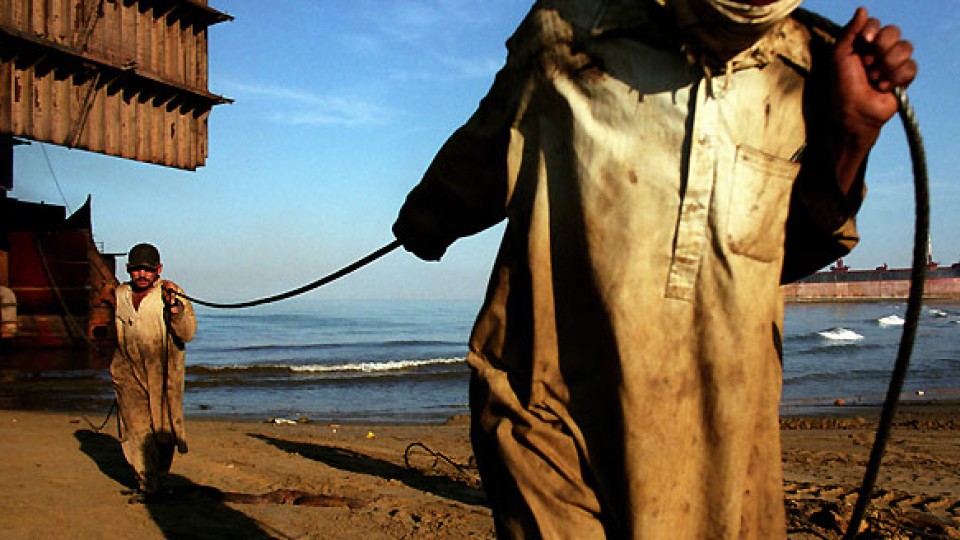 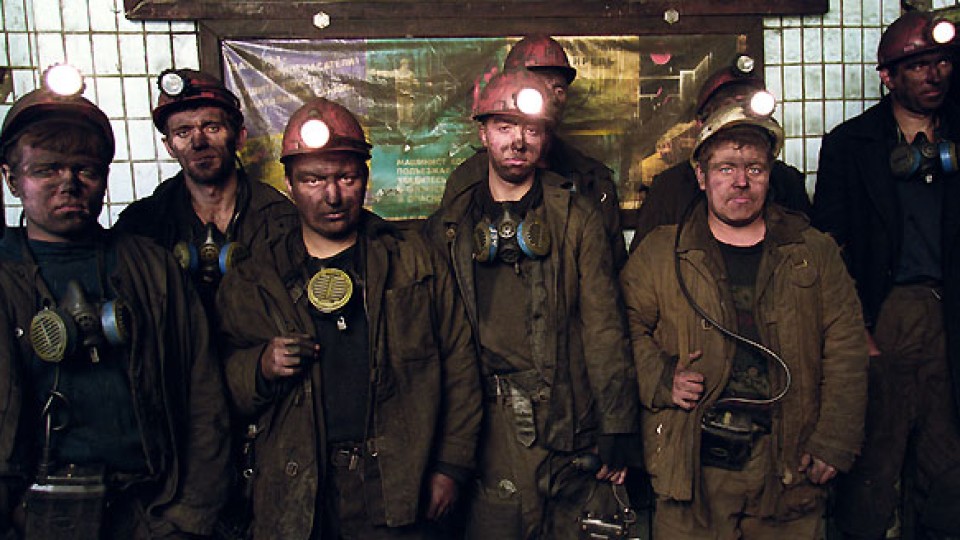 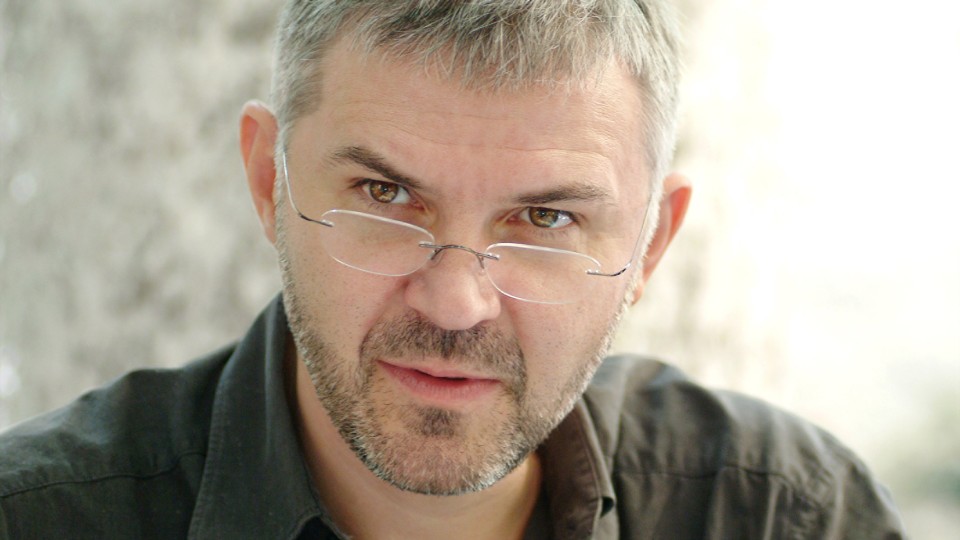