All
you can
watch
Whether on the right or the wrong side of the law, in military conflicts or for personal defense, the fame of the Glock pistol knows no bounds. On the American private firearms market it registers over a million sales each year, while in the music scene there it is rare to see a brand name used so often as a synonym for the object in question. But in Austria itself people know little about the international success story of this Austrian weapon. Now Fritz Ofner and Eva Hausberger plan to change that with the documentary Weapon of Choice.


In your first two full-length films, about the Civil War in Guatemala and the revolution in Libya, you confronted situations where violence involving the use of firearms was everyday reality. While you were shooting those films did you come across this legendary Austrian weapon so often that you chose to dedicate WEAPONS OF CHOICE, your third full-length film, to a subject which has its roots in Austria?

FRITZ OFNER: I filmed one core scene of Evolution of Violence in a gun shop in Guatemala, where the owner set out his range and concentrated on the Glock, because it was made in Austria. In Austria itself the name Glock is shrouded in mystery. When I actually set out to do some research I was astonished both by the "success story" behind this gun and by how little information about it is public knowledge in Austria. That was one of the main reasons I made a film about the subject.


The Glock company is known for categorically rejecting any approaches from the media. How quickly did it become apparent that the Glock pistol would be a crucial component of the film, as an object of the myth, but its development and manufacture would not? How difficult was it to be obliged to work around the core of the subject due to the taboos surrounding it?

FRITZ OFNER: My starting point, as with my previous films, was an anthropological consideration: an object which is created in Austria is sent out into the world and sold, and as a result it becomes charged with a wide variety of meanings by its users. In one early step we attempted to define where this gun originated and who used it. The USA is the main consumer, and without that country’s gun culture the Glock company would not have such a powerful international presence. We discovered how subjects like police violence, inequality between black and white people and the tension between the poor and the rich could be addressed by focusing on this pistol. "Glock in the US Gun Culture" is the first of three narrative strands. The second is devoted to "The Man behind the Gun". Gaston Glock is a myth who has for over 30 years used all possible legal means to avoid appearing in the media. We wanted to get close to this myth. We circled around Gaston Glock and his company by meeting people who have contributed significantly to his company’s strong position today. Both of the people we interviewed left the company on bad terms; we spoke to one while he was in prison, and the other had just been released. It's also significant that we were only allowed to film the concrete walls surrounding the gun factory, and we couldn't speak to anyone who works for the company today. In the third part of the film we attempt to show the geo-political environment in which the company developed. Glock is a child of the 1980s, with turbo-capitalism, hip-hop and tax oases. It was the period of 9/11, War on Terror, wars in Iraq and Afghanistan, leading up to Isis. While we were editing the film it was a huge challenge to bring these three narrative strands together and find a balance that unified the different approaches to form a coherent dramaturgical structure.


Did you do a great deal of research before filming, or did the process of shooting the film bring you again and again to a place where new facets emerged?

EVA HAUSBERGER: We did a lot of research in advance. However, it was only possible to find most of our interviewees in the USA. You simply can’t find gangsters in Vienna who will appear on camera, or track down someone like Jeans Cruz, the soldier who arrested Saddam Hussein, and persuade him to take part in the film. We first went to Chicago for three weeks to do research and find someone from the gangster scene who was prepared to talk. A year later we went back in order to film a long sequence with Derek. Intensive research was conducted, both here and there.


How do you approach somebody from that environment and persuade him to appear on camera for the film?

EVA HAUSBERGER: We were very open about it, and we didn't place any demands at all on him; we visited him often, spent time with him and his family, and explained very clearly what we wanted. It was similar with Jeans Cruz. We met him regularly in New York over a week and tried to persuade him. At first he wouldn’t agree. Four weeks later we got in touch with him again. I think the time you're prepared to devote to something like this is what creates most trust.

FRITZ OFNER: I think the presence of the camera can also have a healing effect. People who are carrying traumas around with them can be helped by focused attention to better understand their own traumas, communicate them to others and processes them to a certain extent. I had the feeling with Jeans Cruz after we had interviewed him that a burden had been taken from his shoulders, at least for a few hours.

EVA HAUSBERGER: There's a fine dividing line between using the camera in a healing, respectful way and using it for exploitation. We experienced that in particular with Jeans Cruz, who was celebrated as a war hero when he returned from Iraq and besieged by journalists who wanted a quick story. The crucial point is how you handle this medium.


Making a film about the Glock pistol must involve confronting a highly ambivalent if not cynical success story, and fundamental ethical and cultural issues concerning guns themselves must arise. How startled were you when you discovered the incredible cult status this gun has in such a wide variety of social groups?

EVA HAUSBERGER: It really was an extremely sensitive task, describing the history of this enormous success which is based on an object that can kill. How do you tell that story without hype, without idolizing the object? How do you maintain that delicate balancing act which enables you to be non-judgmental? Our determination to do that made the editing process particularly difficult, since we were trying to stay objective, and we didn't want to make an advertising film inadvertently.

FRITZ OFNER: The point wasn’t only not to make an advertising film but also not to moralize. We didn't want to come across as anti-gun activists telling people how to live their lives. We do have a position on this subject, but in this film we wanted to tell a story. If there are people who are enthusiastic about this gun, then we let those people express their feelings. This montage of views shows our many-faceted perspective on the subject. It was important to us to show a whole range of situations where the gun appears: it must be left to the audience to evaluate what they see in moral terms. When people go to see a documentary film they don't want to be given a lecture.


How did you discover that the word Glock is such a familiar term in hip-hop culture?

FRITZ OFNER: I was a fan of hip-hop long before I became interested in Glocks or documentary films. I've always been familiar with the word. But for a very long time I simply didn't realize the gun was manufactured more or less in my own backyard. It was only when I started doing research that I became aware how ubiquitous the Glock gun is in hip-hop. For some years Glock was one of the most-quoted brand names in the Billboard chart hits. It even got to the stage that the brand name became used in the USA as a generic term for pistols.


The film begins with fade to black and an atmospheric sound sequence before the first image is seen and you speak on camera in your own voice. Which factors did you take into consideration when you were devising the soundtrack for WEAPON OF CHOICE, and in particular this subjective solution using your voice?

FRITZ OFNER: It was always my idea that the documentary should be presented as a film noir with plenty of dark moods, atmospheric images and grim music. Our desire to tell the story from a variety of perspectives made it necessary to find something we could always return to. And that unifying element is my voice off; this film is the first time I've used it, and it took me a long time to decide I should do so. The story is again and again brought back into focus by the narrative voice combined with music or atmospheric elements, so it can then drift off again. We thought about which music to use from the very start, and we even listened to some of the tracks while we were shooting, so the images appeared in my head together with music, and then in post-production the music Peter Kutin composed made it possible to recreate images again.


To what extent does the current #NeverAgain debate add a new note to the discussion, which WEAPON OF CHOICE will also prompt, about the private ownership of guns?

FRITZ OFNER: To be frank, I'm a bit tired of that discussion. There was one multiple killing which proved to be very important for the Glock company: the Killeen massacre in Texas in 1991, which was at the time the worst multiple killing in the history of the USA. A Glock was used – and it had a huge marketing effect for the company. In 1991 that situation prompted a debate in the American Congress and the media. Now in 2018 in the same debate is taking place: in 27 years nothing has changed. It took us five years to make this film; in that time alone there were numerous multiple killings, all extensively reported in the media, and in several of them a Glock pistol was used. Each time the discussion was the same: absolutely nothing changes. The most recent events in Florida provide new ammunition for the discussion, but I don't really think the current debate will change anything.

EVA HAUSBERGER: In my view the positive thing about the present debate is that schoolgirls and schoolboys are coming out in public, demanding to be heard, and maybe a shift in attitudes is taking place among the younger generation.

FRITZ OFNER: While we were filming his project we saw very clearly the extreme polarization in American society. If you talk to two Americans, one from the east coast and the other from one of the southern states, you really get the feeling you are in two completely different countries. It's just that the question of gun ownership illustrates that polarization particularly clearly, and the two are always linked. 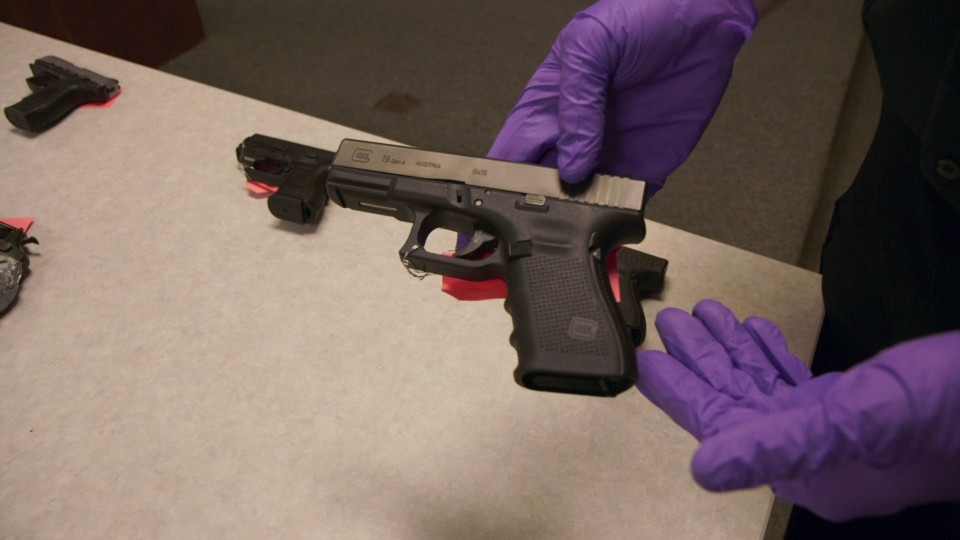 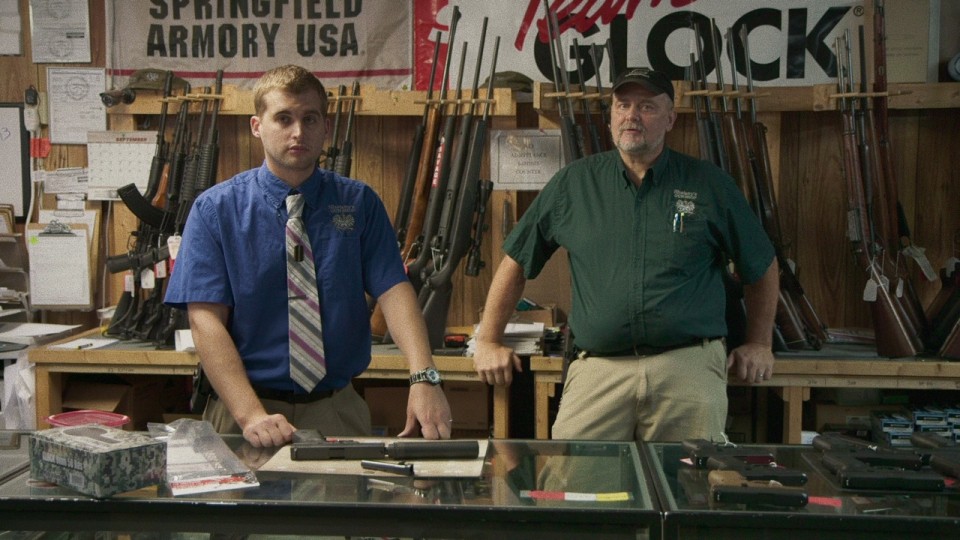 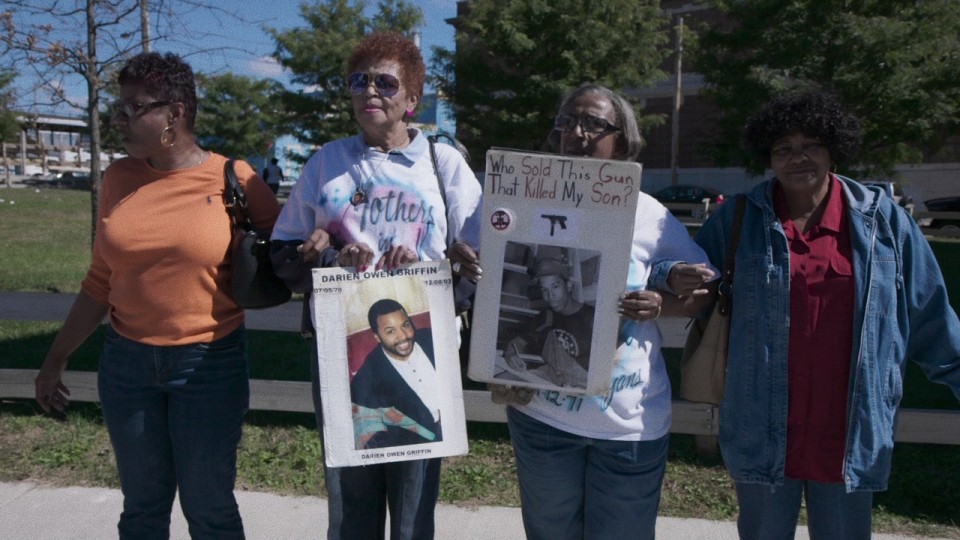 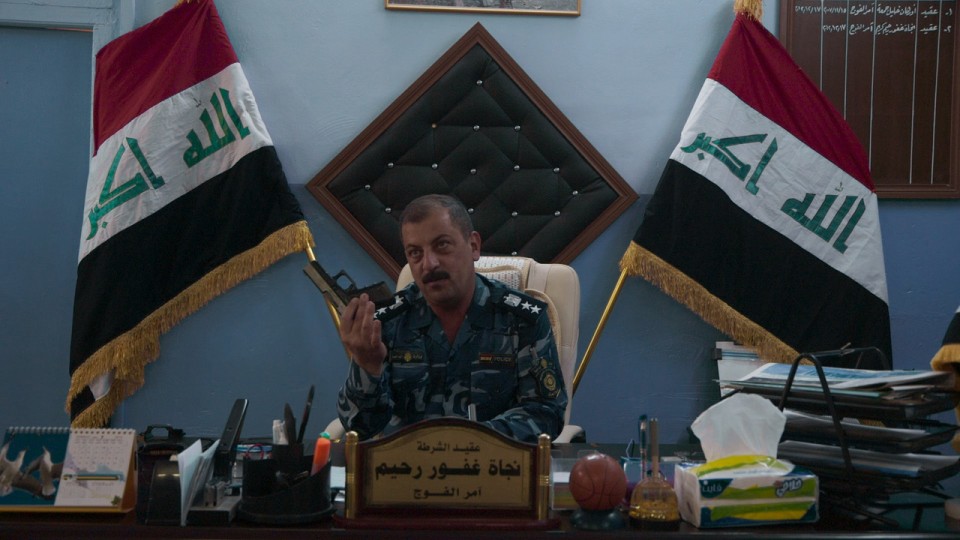 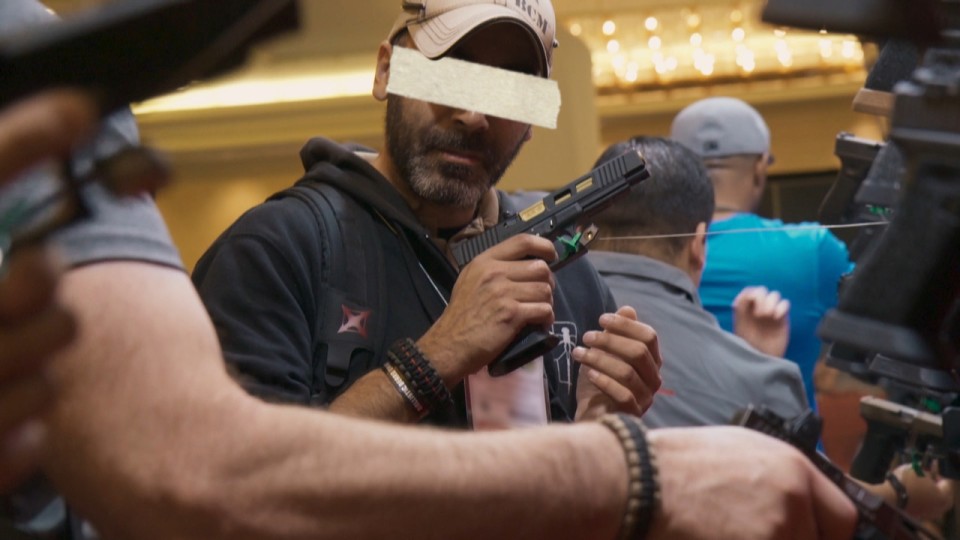 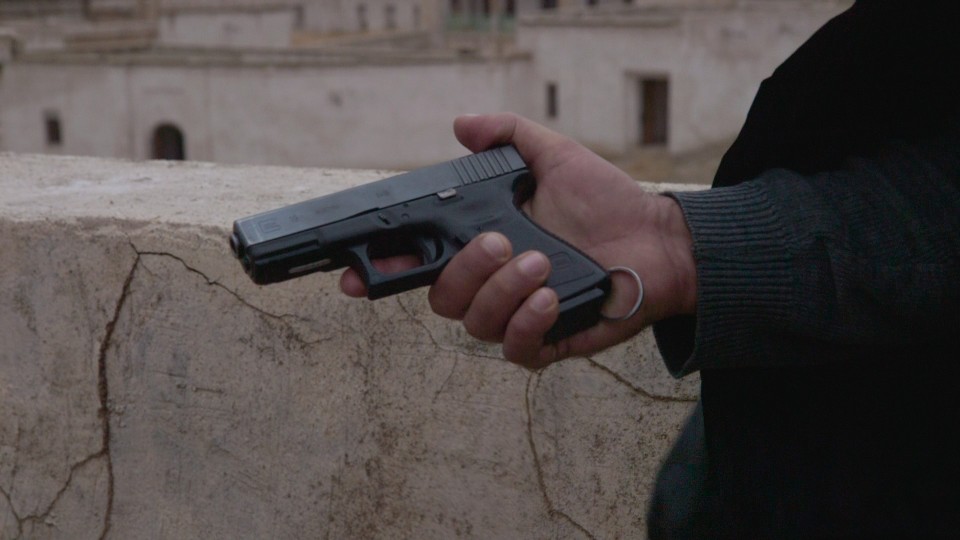 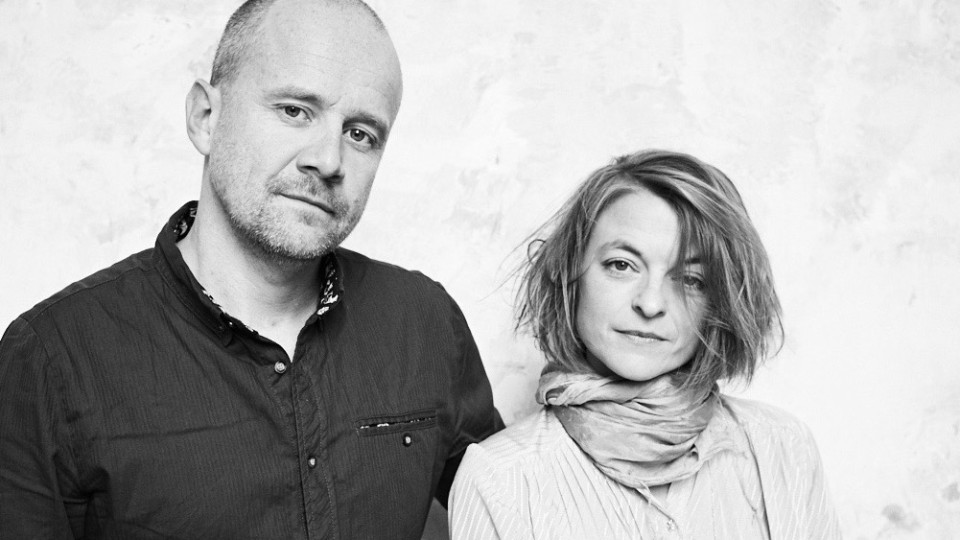 «We discovered how subjects like police violence, inequality between black and white people and the tension between the poor and the rich could be addressed by focusing on this pistol.»