All
you can
watch
Cliff’s garage, where he prepares used cars and second-hand parts for sale and export, is a very special place. And the Nigerian metal dealer, who has built up a business in Austria over the years all by himself, is an extremely distinctive character. In his essay Movements of a Nearby Mountain Sebastian Brameshuber creates a portrait of a man and a place, observing a determined loner as he goes about his work inside and outside time, thus bringing history and the present to life in the setting of the Erzberg iron ore mining region in Styria.

There are many levels to MOVEMENTS OF A NEARBY MOUNTAIN: let's first take the most apparent one, that of the portrait. Cliff is a self-made man who, as an immigrant in Austria, has managed to establish a very good network and set up his own (inter-continental) business with used cars and spare parts. What does Cliff as a protagonist convey for you? Which fundamental questions about the genre of the portrait interest you?

SEBASTIAN BRAMESHUBER: Cliff fascinates me as a personality. He is one of the few people who have continued in the business even though it has become very hard. He is by nature a solitary fighter who has achieved something alone. He approaches things in an incredibly consistent way, with a very individual tempo: everything he does is extremely precise and thoughtful. A sort of displaced temporality came into being, which only works with him. In the large hall, where he usually works completely alone, time attains an almost tangible quality. Time, and that space, provide the essential raw materials for the construction of the film. Cliff started his business at a time when there was no recycling lobby interested in those cars as scrap metal, and the import duty in Nigeria was significantly lower. Today everything has become much harder. And Cliff now sells many cars not to Africa but to Hungary, Romania and Bulgaria. These countries are also part of the market he serves, because even just over the border from Austria there is a demand for our decommissioned consumer goods.


Did you shoot for short, concentrated periods or was it more of a long-term observation?

SEBASTIAN BRAMESHUBER: At first I intended to film through the cycle of a year. I abandoned that idea when it suddenly became unclear how long Cliff would continue working. I filmed for 2 weeks in the summer and then for a longer period in the autumn, without a break. After that we did some shooting in Nigeria and a few isolated re-shoots. There are also a few sequences from raw material for my short film Of Stains, Scrap and Tires, which I'd filmed earlier. Since one of the basic themes of the film is recycling, I like the idea of re-using sound and visual material in it. Apart from that, when I looked again at the 16mm footage I noticed one peculiar characteristic of Magnus’s, which is that he again and again appears in a curious way and then vanishes. Since that was repeated at certain moments in the new footage, I began to work with it. I wanted to make a film that raised itself perhaps one centimetre above a factual base by helping surreal moments which occur in everyday life to become visible.


How important was it for you to use off-screen narration? I'm thinking in particular of the long, uncut sequence where Cliff and Magnus are commenting on a paintball scene without us actually seeing anything of it.

SEBASTIAN BRAMESHUBER: At that moment Cliff and Magnus really are top actors, because they're providing a commentary on something they aren't actually looking at, something that happened in the past. For this scene, which I regard as the heart of the film, I asked them to imagine the events or to remember them. And then, while editing, I added recycled paintball sound effects. If you don't know the short film, then you don't know anything at all about the paintball area, or what's happening there. I also worked very much off screen in earlier films, because for documentary work in particular it’s always a way of suggesting that there must be a reality beyond the reality shown on film. Apart from that, when you are working on documentary films especially you realise that leaving something out, or off screen, is an important element. Essentially you have to abandon a great deal of material, some of which is very good, because the individual parts of the material simply don't fit together.


The car as an object plays another central role here. Cutting up the vehicle into elements that can be used and elements that can't often resembles butchering an animal. The question constantly present here is about value, and evaluation: what is still worth something, and for whom?

SEBASTIAN BRAMESHUBER: In German we speak about "slaughtering" a car when it is scrapped, and Cliff also talks about "butchering" in English. Can a person do anything at all which doesn't, in some kind of analogy, relate to the body or our environment? A car’s engine is really a sort of heart, and the on-board computer is a kind of brain. Cutting up the vehicle is visually and acoustically very appealing; actually, the audio-visual universe of the garage could be explored in far greater depth. Cliff has an incredible eye for generating value. Not only with the car itself but also with the individual components. 98% of the automobile market in Nigeria is based on second-hand cars from abroad. With a population of 190 million, the potential market there is more than twice the size it is in Germany. And naturally the market for used cars also generates an enormous market for spare parts, which also have to be supplied.


Cliff as a protagonist also relates to your previous work, which repeatedly considers the domains of masculinity.

SEBASTIAN BRAMESHUBER: Cliff is an independent and very strong character, and it wasn't always easy to work with him. He is a lone fighter, perhaps even reminiscent of a cowboy figure, and he represents a certain form of masculinity that simply no longer exists in certain areas: the solitary, cigarette-smoking man who cuts up cars without the help of machines. I was reminded of my protagonist Andi in And There We are, in the Middle; I could perceive his search for masculinity in the practised gestures he displayed. In Cliff's case it's completely internalised: he also comes from a culture where male stereotypes are not at all questioned. There’s something nostalgic about that, and to some extent it is a judgement call, because you have to be very careful about the attitude you have to what you see. What is it that you want to see? What are you allowed to see? What should you see? It's true that the subject of masculinity does seem to run through my filmography. In my first long documentary film I focused on a male community of Muezzins, and in And There We are, in the Middle I was particularly interested in the character of Andi, because I could most easily identify with his inner conflicts. Later, with Of Stains, Scrap and Tires, it became apparent to me that it was a subject which constantly re-occurred. I'm particularly fascinated by Cliff's hands, which is probably connected with my father's hands, since they are very big; he is also a loner who likes to go into the forest to chop down trees by himself.


What was the impetus for the mythological or literary element in the form of the Waterman legend, an account of the origin of the Erzberg iron ore mining region?

SEBASTIAN BRAMESHUBER: I felt there was a very interesting connection between the nearby Erzberg, Upper Styria as the Austrian rustbelt, the work that Cliff does there and the recycling and reusing of things which are predominantly metal. I knew the legend of the Waterman from school, even though I'm not from the Styria region. The figure of the Waterman is mainly marketed in the Erzberg area as a tourist attraction, generally as a Poseidon-like character with a long beard and a trident. The legend is that this mythical being used to sun himself on a stone next to the water until he is captured by locals. They only release him when he gives them the Erzberg, and it's a really violent exchange; it’s not at all a gift, though it’s often depicted that way in a cute, childish narrative. His promise that the iron will last for ever strikes me as a lie on the part of the Waterman, so he can get free. The legend also features him laughing loudly when he returns to the water. Ovid suggests in Metamorphosis that when mankind begins to claim natural resources as possessions, it marks the beginning of arguments and war. It's interesting that this idea re-emerges in such a popular narrative as the Waterman legend.


When did it become clear that you also wanted to shoot in Nigeria?

SEBASTIAN BRAMESHUBER: I wrestled with the decision for a long time, because I wanted to avoid creating the feeling that Cliff was going home. Of course, he did show us a lot of things, but when we were editing I insisted that he should only appear in a professional context. I only returned to the mythological level at the end, playing with the ambiguity that is created. Cliff goes into a dense tropical forest, eats some fruit and walks on, but nothing happens. In the end there is darkness and a mobile phone that lights up, and off screen we hear a car starting. These days it's probably impossible to find an "innocent" place, a paradise on Earth. When Cliff tells the legend again at this moment, in Igbo, it’s also connected with the fact that it actually functions on a universal level.


At the end of the film, what brings you back from Nigeria to the winter road in Styria?

SEBASTIAN BRAMESHUBER: At the end of the film I overlay the car journey through the snow with the chirping of crickets from Nigeria. That is based on the concept of a temporal and a geographical overlap. I tried to create a space where the present and the past overlap, and so do geography and language. To give immaterial things a material quality, and vice versa – that's something you can do in film, because so much can remain non-concrete and ambiguous, in contrast to language. 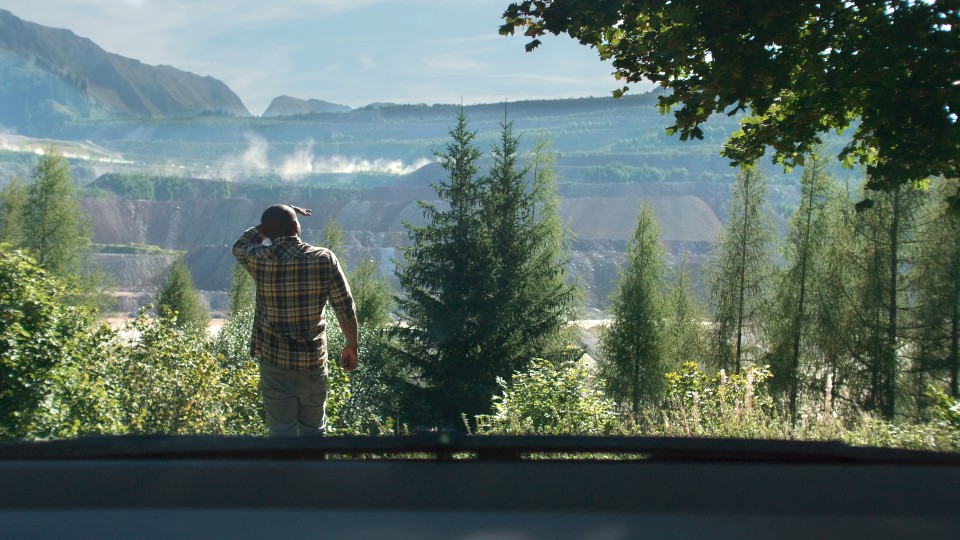 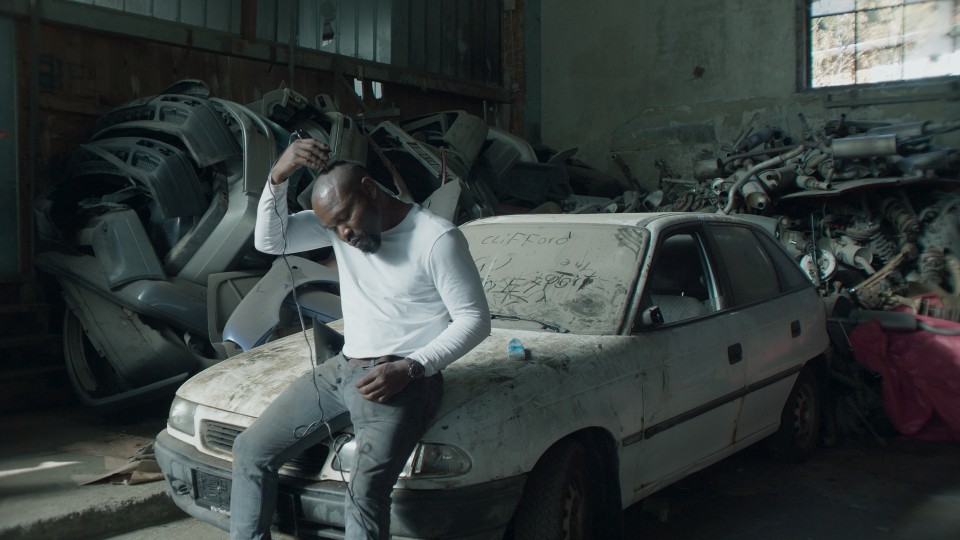 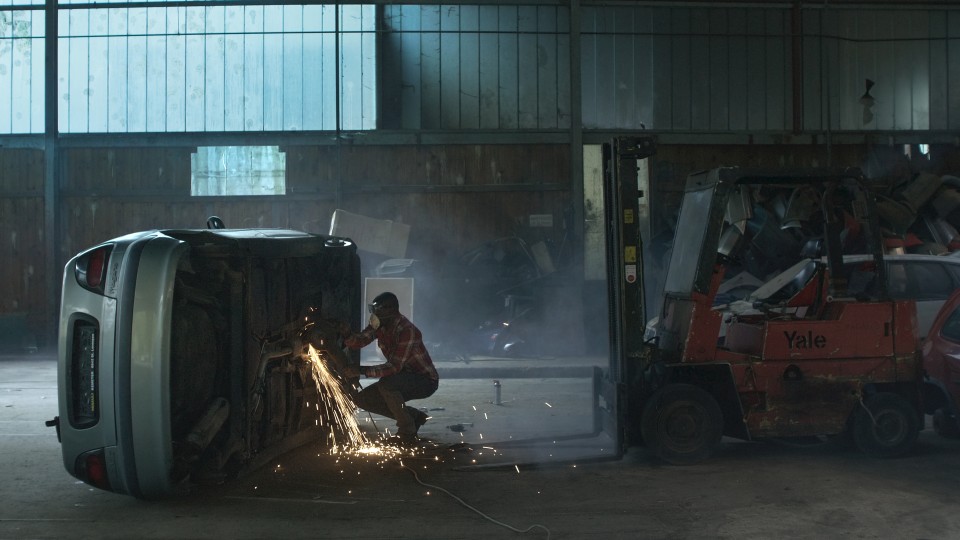 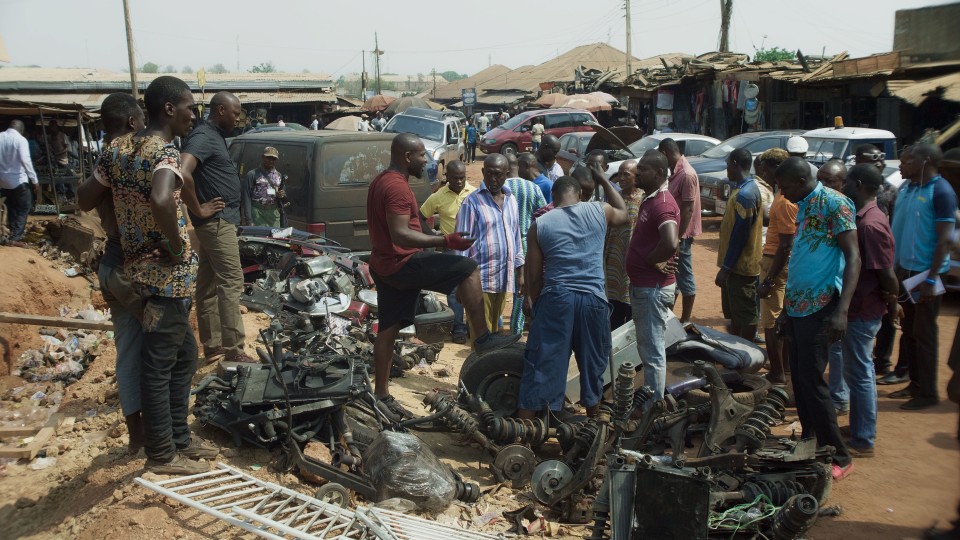 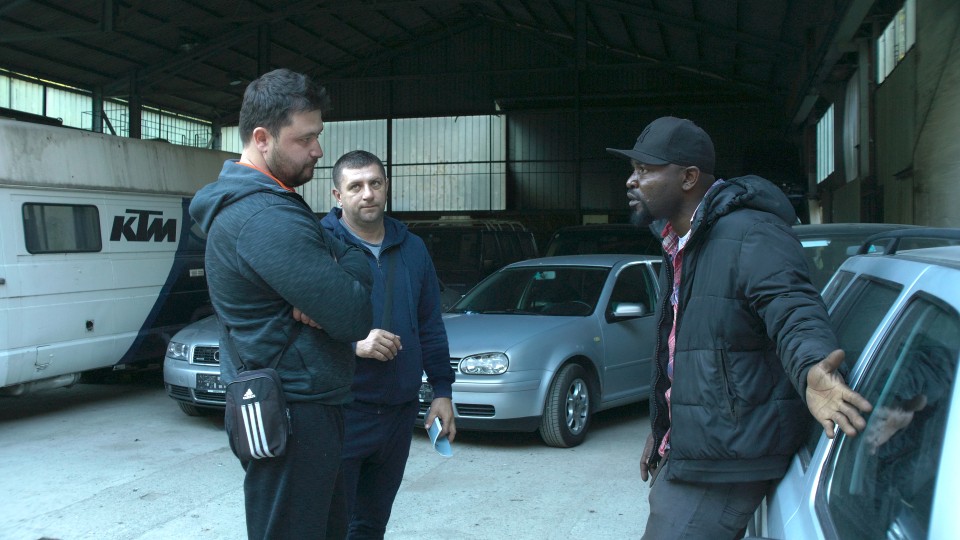 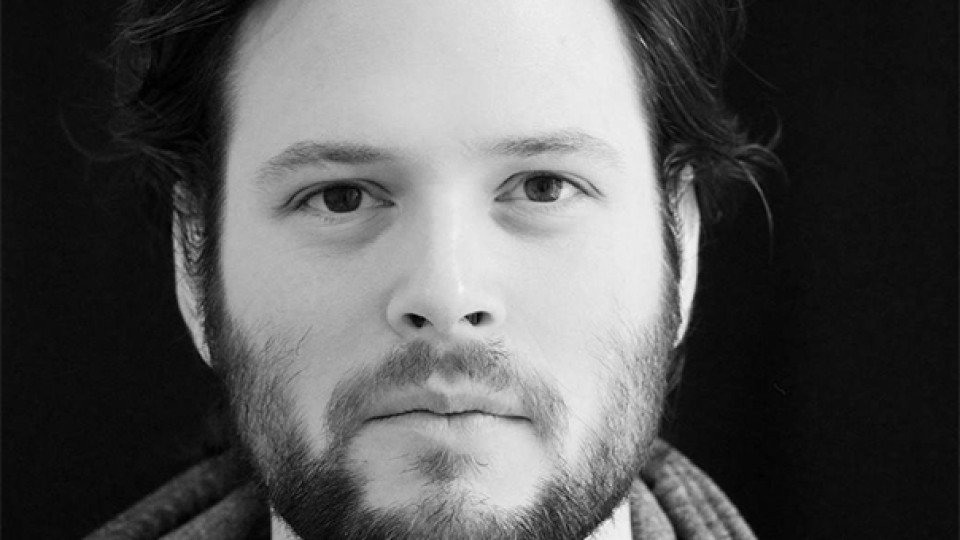 «Cliff is an independent and very strong character, and it wasn't always easy to work with him. He is a lone fighter, perhaps even reminiscent of a cowboy figure, and he represents a certain form of masculinity that simply no longer exists in certain areas.»