All
you can
watch
From law reporter to film journalist to assistant director to screenwriter to Ulrich Seidl’s artistic associate to feature film director and, together with Severin Fiala, to half a genre film writing duo popular on both sides of the Atlantic. Veronika Franz describes the course of her career as a process of constantly daring herself to do more, and since her breakthrough with Goodnight Mommy she appears to have overcome at least two hurdles with every step she takes. Preparations are underway to shoot the next Austrian Franz/Fiala project, The Devil‘s Bath, and the American remake of her debut will start filming soon. The 77th Venice Film Festival has invited Veronika Franz to serve on the jury, which is headed by Cate Blanchett, to decide who wins the coveted 2020 Golden Lion.


You have been appointed to the jury of the 77th Venice Film Festival, where – together with Cate Blanchett and your fellow directors Joanna Hogg, Cristi Puiu* and Christian Petzold – you will award the Golden Lion (among other prizes). What's the best part of an invitation like that?

VERONIKA FRANZ:  The invitation reached me when I was in Iceland, just as I was gazing over the simmering mud in the mouth of a black volcano (laughs). I was very surprised and honoured: after all, it's a huge mark of recognition to be entrusted with the task of choosing the most artistically outstanding films. And after this long pause due to the Coronavirus, I hope works of particular artistic interest have accumulated now.


What links are there between your artistic work and the Venice Film Festival?

VERONIKA FRANZ:  Plenty! I went to Venice for the first time in 2001 with Ulrich Seidl’s Dog Days, and we won the Silver Lion. That was followed by more films with Ulrich Seidl: Paradise: Faith, Safari and In the Basement – and Goodnight Mommy, my feature film debut with Severin Fiala, had its world premiere in 2014 in the Orizzonti section. That's also when the foundation of its success was established, when agents from the Harvey Weinstein Company offered to buy it virtually on the night of the premiere. Apart from that I must say I generally like the selection of films for the Venice festival a great deal. Alberto Barbera reaches out to visual filmmakers and isn’t afraid of genres, which very much corresponds to my attitude towards cinema. And the atmosphere in Venice appeals to me a lot. I love ships, to the extent that I've even considered moving into a houseboat. I'm simply happier on a moving deck than on firm ground. So for me Venice is the most beautiful festival of all.


Being invited to Venice is really the icing on the cake in a process of artistic development which has moved at almost breath-taking speed in just a few years, through projects in the USA as well as Austria. Can we go back to your first involvement with films?

VERONIKA FRANZ:  I first studied German Studies and Philosophy, but at a very early stage I was interested in horror films. I didn't really know what to do with myself. At school I had a fairly wide range of talents, which turns out to be useful for me now as a director, when you have to master a variety of tasks. I started with APA as a law reporter, which is already a very theatrical form of journalism. Then I moved to the Kurier daily newspaper and started writing about the artistic form of drama: film. So I built up my knowledge on the subject by teaching myself, just as later when I started making films: I was doing research and working as assistant director for Ulrich Seidl. I'm somebody who really likes jumping in at the deep end, and I'd rather learn by doing and work myself up that way than study abstract theory. Apparently I'm really not a coward. I'm very curious: I want to experience something new every day and, if possible, develop in the process. Ulrich Seidl's films are very good at ensuring you experience something new every day.


What does the close collaboration between you and Ulrich Seidl on a film mean in terms of exchange, research and processes? What kind of screenplay appears before shooting begins?

VERONIKA FRANZ:  I've discovered how difficult it is if you are a writer and want to become a scriptwriter. Writing in images for a film is not at all like writing a book or a piece of journalism, and I learned that from Ulrich Seidl. Unlike the way I work now with Severin – when we I sit down at a table and discuss every idea together – with Ulrich Seidl the work always involves alternating, to and fro, give and take. Apart from which, his films are very often influenced by the reality and people we encounter. After that comes an intense period of research, and the story is conceived, but the work always remains open to spontaneous changes. With Ulrich Seidl you write the plot like a short story, but much, much more precisely: then you look for actors, and then the story is rewritten, because they bring something to it as well. If the location changes, then the story is rewritten again, and in the editing room it takes on another form too. My collaboration with him isn't restricted to working on the screenplay at the beginning – these days he calls me his "artistic associate" – but also includes various activities throughout the whole developmental process.


When did your desire to develop a film language of your own start to emerge?

VERONIKA FRANZ:  I continued working as a film journalist for a long time, alongside my work with Ulrich Seidl, for purely financial reasons. After all, you can't live from film work alone, even with such a renowned director as him. But after a while I reached the point where I began to feel more like an eternal assistant them somebody who was independently creative. And by then we had started a production company together, so I had the idea of making a documentary film myself; then I happened to meet Peter Kern. By that point I had developed confidence in my own practical skills. However, it was clear to me that I couldn't do it by myself. I had two children, the work with Ulrich and my job as a journalist. In those days Severin was a student at the Film Academy, so I asked him. That's how the first film project with him came into being. Anybody who knows anything about Peter Kern's personality will understand that it wasn't a simple film project. While we were editing the film, Severin and I came up with the basic idea for Goodnight Mommy as we were cooking, and we wrote the screenplay more for the fun of it than anything else. We had survived making a very difficult documentary film together, so we felt capable of making a feature film. Maybe the route I took to being a film director can be described as a process of constantly daring myself to do more. I admire young women these days who go straight to Film Academy after school and do their thing. I wouldn't have felt confident enough in myself to do that straight after school. My way was simply different.


To what extent does your narrative approach contrast with that of Ulrich Seidl’s films – or doesn't it?

VERONIKA FRANZ:  Ulrich Seidl's films are not pure depictions of reality either. With his tableaux and his filmic language he creates his own artistic world, despite – or perhaps due to – all the connections to reality. On the other hand, Severin and I both feel that real life should also be present in a genre film, and that good genre films also always revolve around socially relevant themes. Our films aren't pure genre films but a mixture between arthouse and genre cinema. We like having the freedom to base material in reality and then being able to elevate it from that reality. Techniques like filming chronologically or improvising can help there. We were warned about employing such arthouse methods in the context of a fantasy production. People said those techniques weren't compatible with genre film. Fortunately, that didn't turn out to be the case.


The world premiere of Goodnight Mommy was a springboard for your career of the type found in fairy-tales. What has been achieved since then, and what projects are underway at the moment?

VERONIKA FRANZ:  After the success in America Severin and I were literally pursued by agents. We chose an American agency at that point, to ensure the flood of emails would finally cease. That's that also led to The Lodge coming our way as the next project. The traditional British Hammer Film Productions approached us directly and offered us a screenplay, which we then revised along with the Scottish writer. When it was time to raise finance we decided to approach Film Nation, which have both the financial reserves and the production know-how, and consequently The Lodge had its world premiere at the Sundance Festival. The second concrete project is a US remake of Goodnight Mommy. Playtime, our French world distributor, argued from the start that there should be an English-language version of the film. We were offered the opportunity to direct the remake, but we politely refused: making the same film twice didn't strike us as very appealing. Instead, we became executive producers. The remake, which is being financed by Amazon, is scheduled to start filming soon. And as far as our own films are concerned, we are working at present with a British firm on two new projects.


The Devil’s Bath is the next planned project in Austria, based on historical facts which are virtually unknown. How did you come up with this idea?

VERONIKA FRANZ:  We heard about it by chance, from a podcast. An American woman historian gathered court records and archive material from about 300 cases throughout the whole of Europe which illustrate a European phenomenon in the 18th century we were not familiar with. Women who wanted to die, whether it was due to depression or some sickness, became murderers in order to bring about their own executions. In those days suicide was the biggest of all sins, because it was impossible to confess afterwards. One case which took place in the Mühlviertel region of Upper Austria made a particular impression on us. An Inquisitor conducted three long interrogations of a simple peasant woman, because he really wanted to find out why she had killed a child. Her statements moved me to tears. Quite apart from the fact that historical records are predominantly the accounts of men, they almost exclusively relate to the aristocracy, the wealthy, members of the clergy and perhaps artists. We know very little about the lives of simple people and of women. But in these court records we hear a woman from the 18th century almost verbatim as she talks about her life, her emotions, her fears and her marriage. At the same time, it was a long process for us to find a visual approach to the firm that derived from all those words and statements. We definitely don't want to reproduce a historical portrait; we want to create a separate world. With costumes, images and language. By now we know a great deal about the history, which is a sound basis. From that we'll try to construct a new world without betraying the old one.


* Shortly after our interview with Veronika Franz, Romanian director Cristi Puiu was replaced by Matt Dillon on the Golden Lion jury panel 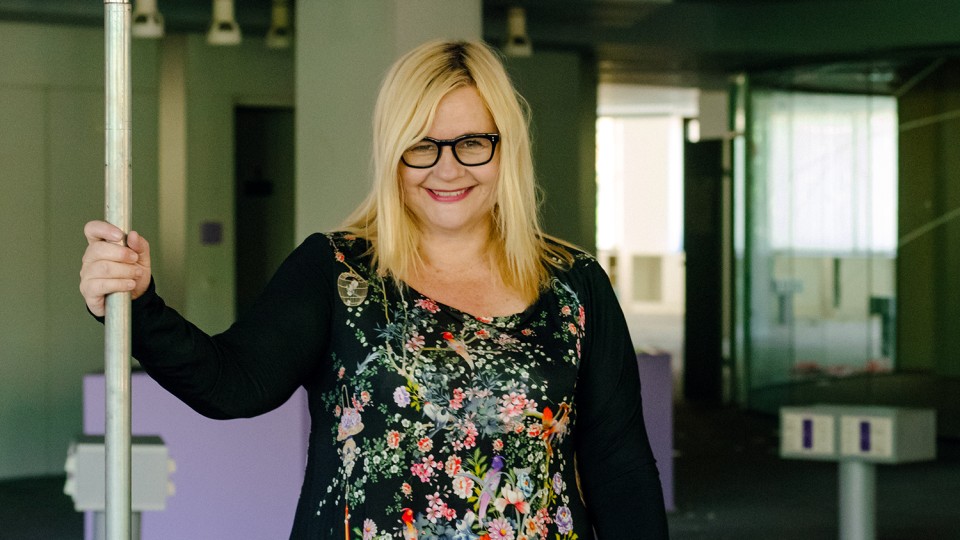