All
you can
watch
Its name has just five letters, the Austrian dream factory in the mountains of Tyrol. Every year, youngsters who are crazy about winter sports apply to the Stams Schigymnasium | Ski Academy to make their talent and technique fit enough to compete with the best in the world. In STAMS Bernhard Braunstein observes young people between the ages of 14 and 18 who are highly motivated in their endeavours to be among the very best, though this involves dedicating themselves to a ruthless performance principle.


The title of your new film STAMS refers to a place that needs no introduction to insiders. For all those who are not fans of top-class winter sports – what is behind this name?

BERNHARD BRAUNSTEIN: Stams is the training ground of Austrian skiing. It is a boarding school in the Tyrolean mountains which admits students from the age of 14 if they pass the very demanding entrance examination. Even if you come from the village of Stams you have to live in the boarding school, in order to comply with the incredibly full daily schedule. You can specialize in the disciplines of biathlon, Nordic Combined, snowboarding, skiing and ski jumping. I didn't want to cover the whole range in the film, so I concentrated on the two biggest sectors: alpine skiing and ski jumping.


What sparked your personal interest in this school?

BERNHARD BRAUNSTEIN: As a child I was passionate about skiing. To the extent that every summer I would be looking forward to winter, so I could go skiing again. I was very attracted to the idea of looking at a place where young people try to live the dream of a successful career in skiing.


The camerawork makes it clear from the outset how much the focus is on the young people: you generally keep the thematic/linguistic focus off-screen, while your gaze remains on their faces. What is the idea behind this powerful focus on faces and individual personalities?

BERNHARD BRAUNSTEIN: This approach, taking the time to look calmly and very precisely at faces, expressions and body language, derives from the aim of rendering the person’s inner life visible. Ideally, you can see in the face and the body language how the person feels at the moment when he or she is being filmed. I think there’s a big difference between someone telling me how he or she got on in a certain situation and my observing it and thus experiencing it directly. That’s also we why didn’t use interviews and attempted to convey the content purely from observation. I am convinced this made the effect of the film more intense. Our DOP Serafin Spitzer did an excellent job. It takes a great deal of mutual trust, a sensitive and well-coordinated team and a feeling for the right distance. Some situations demand great sensitivity about how close you can get to someone without being intrusive.


In the first scenes of STAMS we see athletes who are wrapped up in warm coats, with crash helmets and equipment, each concentrating hard, each for himself or herself. "The school sets up a very ambivalent structure, where the students have a sense of togetherness but also have to develop an attitude where they think only of themselves - and compete against each other. Was this one of the questions you focussed on during this project?

BERNHARD BRAUNSTEIN: The tension between individual and community, the fact that they live in a group and are at the same time in competition with each other, interested me very much as a theme. I noticed in my observations that there is quite a lot of solidarity and not as much rivalry as might be expected at a school like that. In the end, it's all about who gets a place on the team, for example. The person who is a little bit better, faster, and maybe more popular will move forward on the career path. Loneliness and homesickness, on the other hand, are often an issue. The younger ones in particular suffer from not being able to see their families for weeks on end. If they are injured and no longer "function" athletically, they are very much thrown back on themselves, and that experience can be very bitter.


It is striking that the young people’s sportswear is already adorned with the logos of sponsors. How early do the young athletes become part of a machine ultimately designed to promote the business interests of the sports industry through their sporting performance?

BERNHARD BRAUNSTEIN: The logos really are very apparent, and it is striking how early these young bodies become advertising spaces. The commercial interests of a huge industry are at stake, and it has taken on a dimension that is unhealthy for both the individuals and the sport. But I also appreciate that the expenses are considerable, going beyond the school fees: equipment, travel and accommodation costs are enormous, because they constantly compete in races. All that has to be paid for. That’s also why they try to find sponsors as early as possible, so they can absorb the costs. Which, of course, only works if a certain level of performance is achieved in return.


The impression is conveyed that you focus on the young female athletes, and in particular on the young sport of women's ski jumping. Was that a conscious decision?

BERNHARD BRAUNSTEIN: It wasn’t a conscious decision. I spent a lot of time at the school, I got to know a lot of people and to appreciate them. Some people intuitively convey the impression that filming with them would work well, because they’re expressive and act authentically in front of the camera. Another factor that played a role was that I was very fascinated by the complexity and elegance of ski jumping, especially women's ski jumping, which is a young sport currently on the rise with very successful athletes from Austria.


When it comes to the trainers, everything seems to be in the hands of men?

BERNHARD BRAUNSTEIN: The training of young athletes is clearly a male-dominated field, and it certainly is a problem that the girls are mainly trained by men. There’s a scene in the film where a jump suit is measured and then sewn tighter, because the dimensions must adhere to very strict regulations. The fact that the suit has to be adapted for competition is completely normal, but in my view it’s problematic that this is done by a man on a young girl. It’s very important that there should be more female trainers, and more awareness of how the trainers behave in such a delicate situation.


You manage to create some very fine moments with the young people. How did you build up that relationship with them?

BERNHARD BRAUNSTEIN: The rapprochement arises on the one hand through the time factor, and on the other hand through your behaviour, as a director, and that of the whole team. How do I explain to people what I want from them? I always act very openly and honestly. I never try to tease something out of people that they themselves don't want to give. I often felt there was a need to address certain issues, and I realized that the film can give a voice to young people who are often not heard. What’s required of them is predominantly performance. So I tried to create situations where they can talk about topics that really concern them.


Sports such as ski racing or ski jumping are primarily known from television images. Was it important for you to convey, in few very impressive sequences, the steep gradients and the speed that the athletes subject themselves to?

BERNHARD BRAUNSTEIN: It was important for me to convey a real feeling for the high speeds. The static shots, where someone just flashes through the image in a fraction of a second, seemed ideal for this purpose. It was also clear that I didn’t want to reproduce the familiar pictures from television. I wanted a different, accurate and subjective view. What I wanted to show is the skill of these young athletes: their strength, the elegance of their movements.


One of the girls says: "Without skiing, I wouldn't be me."  One of the boys remembers the free skiing of his childhood, which has now been completely replaced by targeted skiing and he misses it. All the children come to this school because of their enthusiasm for skiing. What happens to that passion?

BERNHARD BRAUNSTEIN: That’s an absolutely core question. For all of them, it starts with an incredible desire for skiing. And in that context the school in Stams constitutes an attractive prospect; a place where they can pursue their passion and at the same time graduate from high school. And then, I believe, many of them experience very powerful disillusionment. A lot of the passion is destroyed by the rigid routines and the pressure to perform. Will I get into the squad? How quickly can I get back on the slopes if I'm injured? Can I make it through the school despite all these requirements? There is very little time for anything other than school, food and sports. Some people feel they're in a tunnel. The feeling is communicated that every minute must be used. This is problematic, because they have already made incredibly large sacrifices: very little free time, a very reduced group of friends, little family life, sole focus on sports, training and school. There is something very courageous about making this sacrifice, but if the dreams don’t come true, it can shake a young person to the core.


Did working on STAMS also bring you surprising insights?

BERNHARD BRAUNSTEIN: I was infected by the strong physicality. I've been doing a lot more sports since shooting the film, which is very good for me. The camaraderie and solidarity also surprised me, as did the sensitivity, wisdom and ability for reflection displayed by many of the athletes. And it would be wrong to think that no aspect of the big dream ever comes true. There are also bright spots, the joy of success, of experiencing one's own strength. Mastering a technique that enables you to plunge down a steep hill and then fly for 120/140 metres is a great thing. And mastering something so demanding and dangerous also creates a sense of happiness, fulfilment and grandeur. The film does convey a critical attitude in two main areas: the large number of injuries, and the way some coaches interact with the youngsters. The constant demands, without considering what could be given to the young people going beyond sports. STAMS raises a very general question about the principle of performance and its multiple consequences. A question that also interests me very much outside of competitive sports. 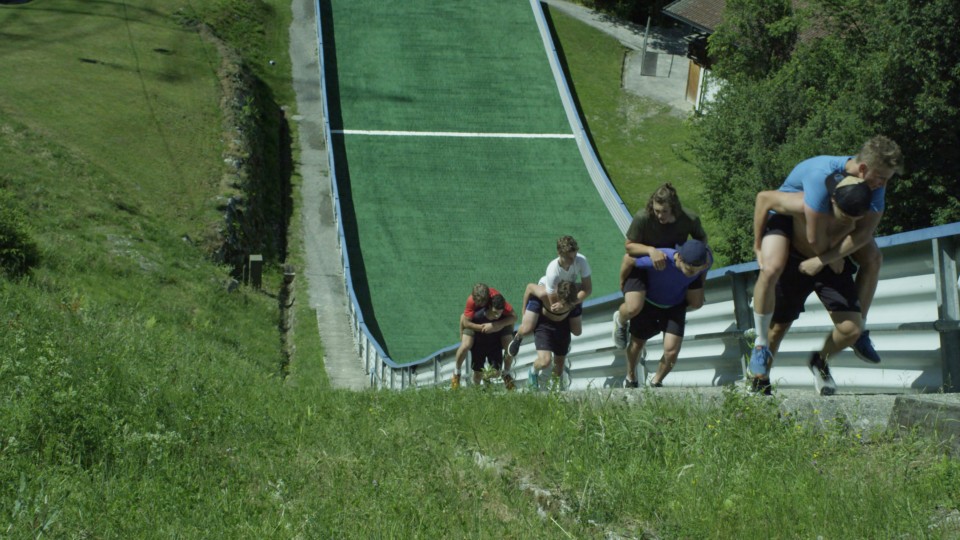 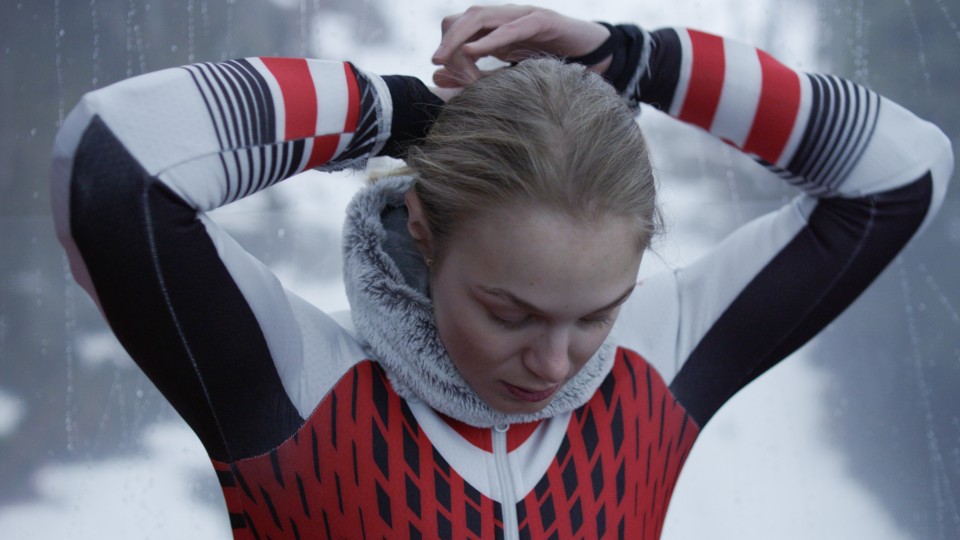 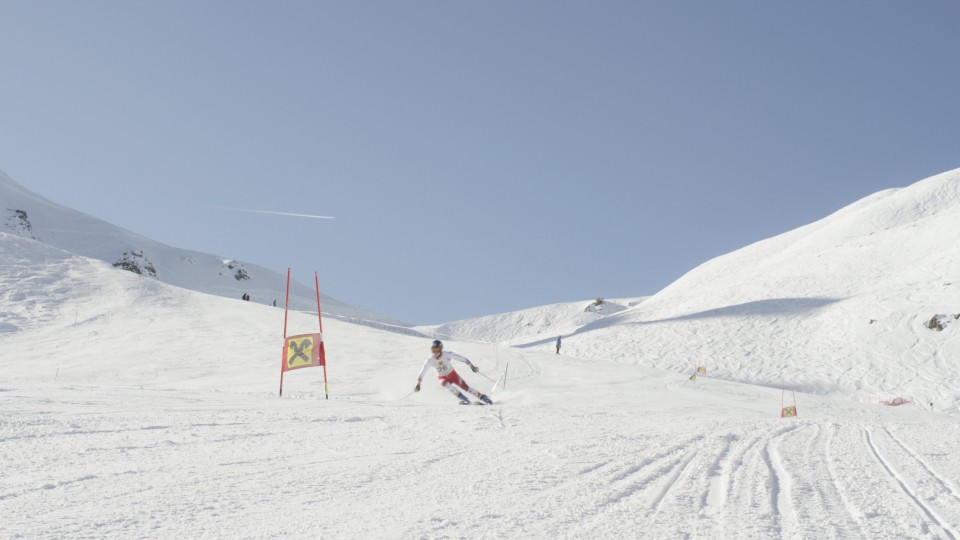 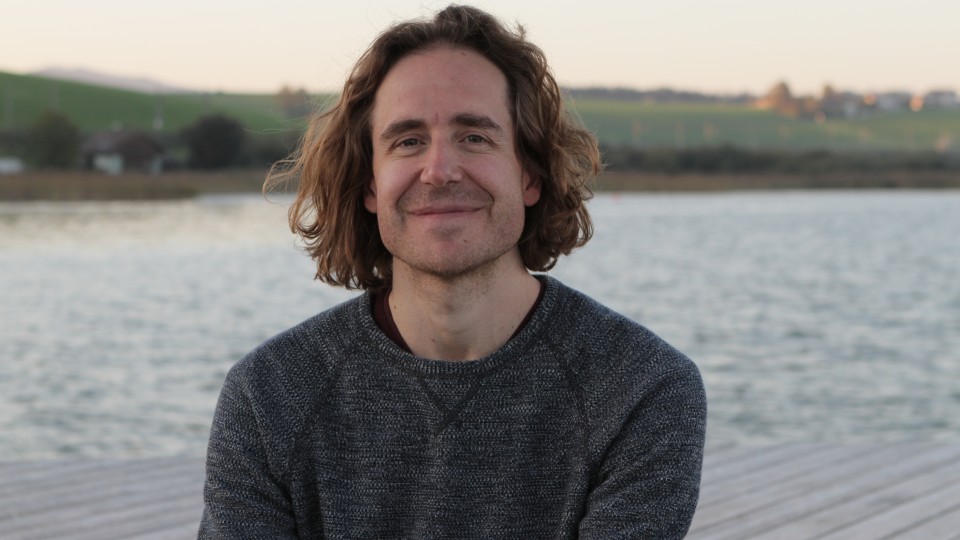 «Mastering a technique that enables you to plunge down a steep hill and then fly for 120/140 metres is a great thing. And mastering something so demanding and dangerous also creates a sense of happiness, fulfilment and grandeur.»