All
you can
watch
The Chamber of Labour is a unique feature of Austrian life. Financed by contributions from the workforce, this independent institution has been representing workers’ rights and interests for the last 100 years. Constantin Wulff has dedicated his new documentary film FOR THE MANY – THE VIENNA CHAMBER OF LABOUR to the Viennese headquarters of this organisation. With his observational camera he wanders through the multi-story building, from the central level of individual advisers to think tanks devoted to labour-political questions and up to the management floor, his precise inspection of this distinctive edifice and its clientele capturing not only the many-faceted spectrum of society today but also the socio-economic conflict zones of modern working processes.


The themes of your previous documentary films, such as Into the World and Like the Others, have always been associated with public institutions. So what led you to the Chamber of Labour?

CONSTANTIN WULFF: I wanted to portray another institution in Austria, and I had approached several already when my wife drew my attention to the Vienna Chamber of Labour. Her suggestion came at a time in 2018 when the government was a coalition of the ÖVP (the centre-right Austrian People’s Party) and the FPÖ (the far-right Freedom Party of Austria). From a social and political perspective I found this period very depressing, especially because those extremely right-wing, populist policies were so dominant and the opposition parties didn’t provide any really substantial alternative. In my view, during that period the only genuine opposition was provided by civil society and the unions, and by precisely the Chamber of Labour. So I wanted to take a closer look at this institution. It was also interesting for me in another sense, because it’s very central to my concept of documentary film that I should discover things I don’t know about.


How do you go about persuading an institution like that to collaborate on a documentary film project?

CONSTANTIN WULFF: Whether or not you get permission to film an institution is largely dependent on whether there are individual people in senior positions who are convinced of the film project’s validity. In the case of the Chamber of Labour there was a very open-minded management team. However, the factor which is even more decisive for me only ever becomes apparent during the research: whether the majority of the employees in the institution also develop confidence in the film. Without the support of the employees I can’t apply my approach to documentary work. It’s essential for me to be able to move around the institution freely, and to be informed in good time about the many things that are going on. I spend months on end on location, without a camera or tape recorder. During this period I get to know the institution, but even more importantly, the people who work there get to know me. It becomes clear to both sides that I’m going to make a film which is based on the principle of independence, and that I don’t have an extremely sceptical attitude towards the institution I’m depicting.


The Vienna Chamber of Labour is a building which was constructed after the Second World War: in architectural terms, it’s a huge block. As a filmmaker, how do you approach the building and attempt – quite literally – to create a picture of what is behind the façade?

CONSTANTIN WULFF: This throws up a fundamental question: what can a picture ever depict? What are the conditions for creating a picture? I choose the Direct Cinema method to depict institutions on film: participatory observation without staged scenes, without interviews, without commentary off screen to explain what’s happening. Adopting this method means that you have to take a huge amount of time both for the research and for the filming itself, in order to get beyond mere illustration. This form of documentary film, which is not based on a pre-formulated script, is always a voyage of discovery, and that was also how I moved around inside the building: with an attitude that was as open as possible.


One important focus of the film is on the Chamber of Labour’s advisory function. This revolves around the individual, representing an extremely broad range in terms of origin and education. Did you find that surprising?

CONSTANTIN WULFF: Every day a huge number of people approach the Chamber of Labour with the issues that concern them. You see very quickly that providing help to people in extreme need is a major part of the institution’s activities. From the perspective of the Chamber of Labour and of the film, it’s a constant stream. I really was often surprised by the wide variety of problems involved. It brought home to me the extent to which, in my everyday life, I operate in a very restricted environment. In the Vienna Chamber of Labour you realise how multi-faceted our society is these days.


It strikes me that the second focus is on the management of the institution. How does the Chamber of Labour itself function as an employer?

CONSTANTIN WULFF: As I said before, the Direct Cinema method of filmmaking has quite clear rules aimed at making what is depicted as comprehensible as possible. Before I start filming I make that clear to everybody involved. From my perspective, it’s not only about capturing the immediate effect of what happens; it’s also about using film observation to retain the complexity of situations, actions and figures. As a result, it remains open to the audience how individual scenes are interpreted. My aim is to enable the audience to draw their own conclusions and experience the situation themselves, and I do that by making individual prejudices, aims and projections open to analysis. About 700 people work in the Vienna Chamber of Labour. Purely in organisational terms, it’s a major operation. I had the impression that the overriding aim is to be an exemplary employer as far as possible.


With your method, what form of communication do you use when you’re filming, especially with the camera operator? How do you actually direct situations when you don’t want to influence them at all, as far as possible?

CONSTANTIN WULFF: Fundamentally, the observational method is always an open approach. For me there’s nothing worse than “scripted reality” or the concept of the documentary “theme film”, where the film merely shows what everybody already knows. For me, a documentary film is precisely the opposite, because it must be a confrontation with reality. Reality which is always surprising and challenging. At least, that’s what we experience as a team when we are shooting and what the audience can then experience in the film. I’ve been fortunate in that I’ve been able to find outstanding specialists for this Direct Cinema approach, with Johannes Hammel and Michael Schindegger operating the camera and Andreas Hamza and Claus Benischke-Lang on sound. The actual communication while filming is a mixture between guidelines and improvisation: whenever possible, camera and sound work with a lot of independence and go along with the situation. If necessary, they follow my instructions quite strictly.


A third focus comprises the external activities of the Chamber of Labour: press conferences, events, image campaigns. To what extent did your view align with that of the PR department?

CONSTANTIN WULFF: From my point of view, the activities surrounding the 100 year anniversary of the Chamber of Labour represented a stroke of luck for the film. When an institution celebrates an anniversary like that, it has to explain itself and come up with a picture of itself. This process of projecting an image involves discussing several very fundamental aspects. For example, at an early stage I realised that a commercial was planned for the publicity campaign, so I spent several weeks recording the whole process of creating this commercial. Very little of that remains in the film, but it’s in the nature of the Direct Cinema method that you capture entire processes most of which doesn’t end up in the film, because one single scene explains everything.


How much had been filmed by February/March 2020, when the pandemic struck? To what extent did this unexpected situation transform your plans by making some things impossible while at the same time opening up a new dimension?

CONSTANTIN WULFF: We started filming in late autumn 2019, and we were in the middle of filming when we were confronted with Covid. By the middle of March we had to press the pause button, and a lot of things had to be cancelled that couldn’t be revived later. But since the gradual development of the pandemic was already part of the film, it was obvious that the film had to carry on following reality. After all, that’s the core of Direct Cinema. Naturally the concept changed as a result: the plan to portray an institution with several weeks filming turned into a much longer process of observation. In hindsight, I’m still ambivalent about the whole thing, because everyday life in the Chamber of Labour was transformed at a stroke, and a lot of what I wanted to film simply wasn’t happening any longer. On the other hand of course it was also fascinating to see how the institution behaved during the crisis, and how the Chamber of Labour reflected the changes in society due to the health crisis.


You said it’s necessary to have a huge amount of material for the editing process, to create a good foundation. How do you manage to whittle it down at that point? To what extent do you aim to establish a balance between the people who come to the Chamber of Labour for help and those who provide that help?

CONSTANTIN WULFF: During the editing process itself I try to bear in mind the impression I had when I initially encountered the institution. For me that’s a kind of basis for my evaluation of the material that has been filmed. Together with the editor, Dieter Pichler, we spent a great deal of time making explicit the relationship and the connections between the different departments in the Chamber of Labour. That struck us as the central task posed to us by the material we had gathered. I’d like to say at this point that I consider Dieter Pichler the best editor in Austria for this kind of documentary film. He has an incredible ability to analyse the material that’s been filmed and then pose the right questions. He is a very precise listener as regards the spoken word. That’s a huge advantage with Direct Cinema, which is often very verbal.


Has working on this film changed your perception of society?

CONSTANTIN WULFF: Very definitely: yes. Alongside many other things, I found myself thinking for the first time about the fundamental meaning of workers’ rights for society. I come from an environment, the so-called cultural sector, where a high degree of self-expectation was a common feature, in the guise of personal fulfilment and cultural participation. Then I could see how well the change of perspective prompted by the film worked in practice during filming: for example, when the crew began to reflect increasingly on their own working situation. In my view this is so effective because the Chamber of Labour is a place which is very close to the needs of working people and which encourages quite naturally a way of thinking and behaving that adopts the position of those people. 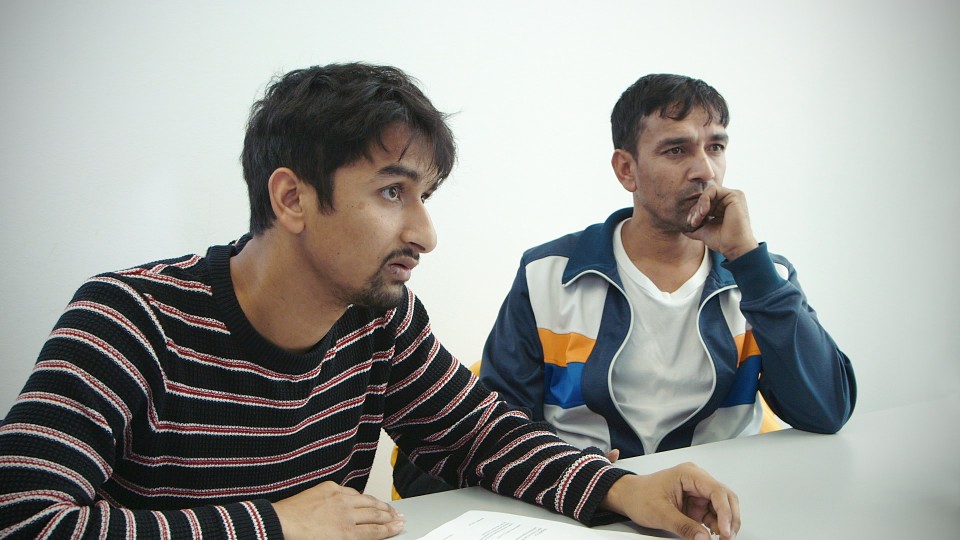 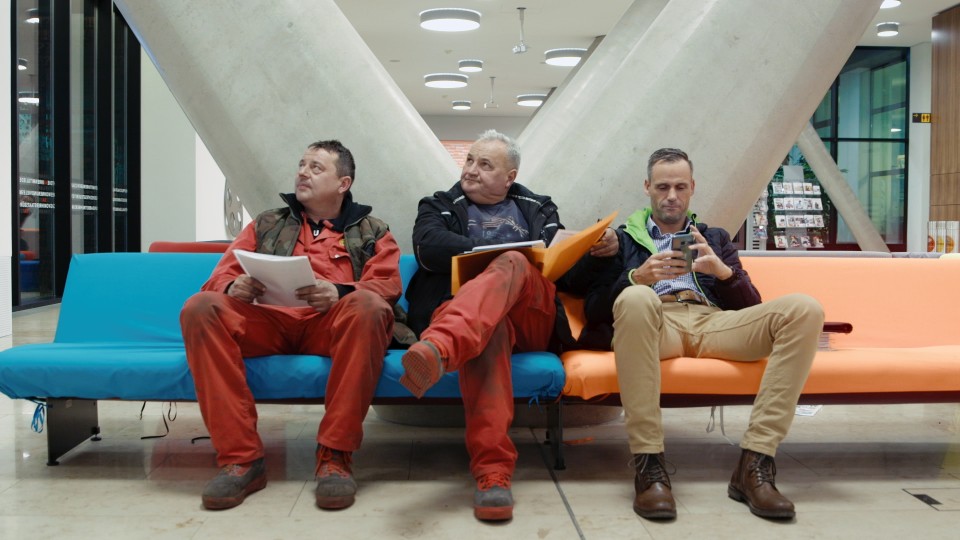 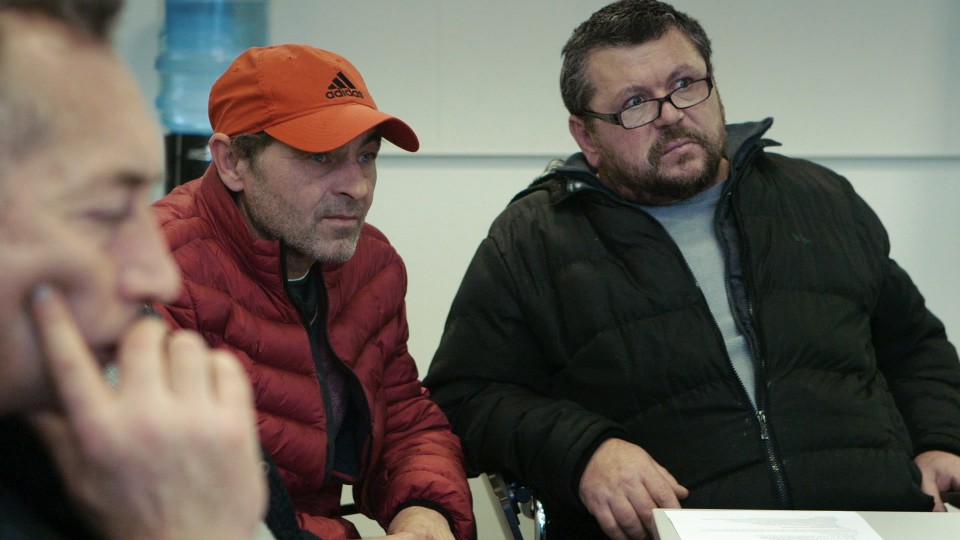 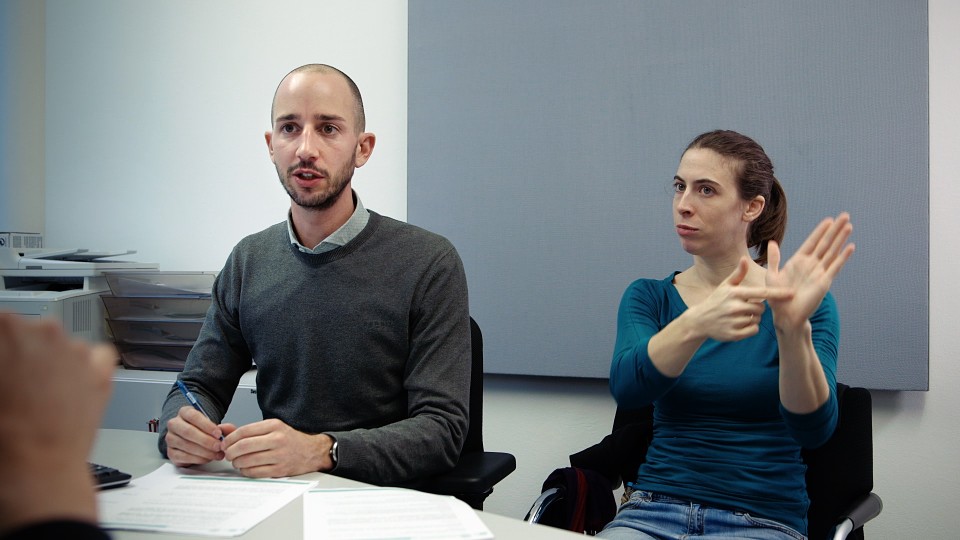 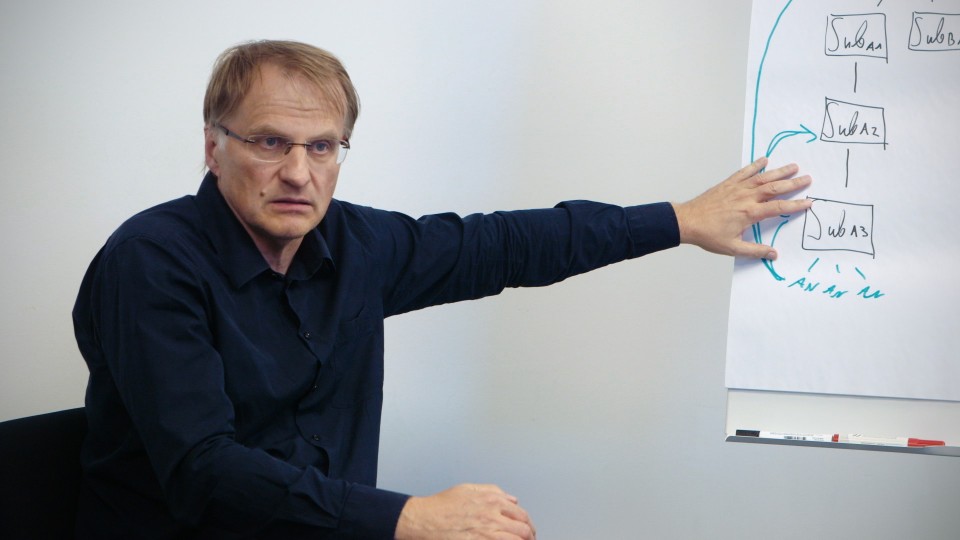 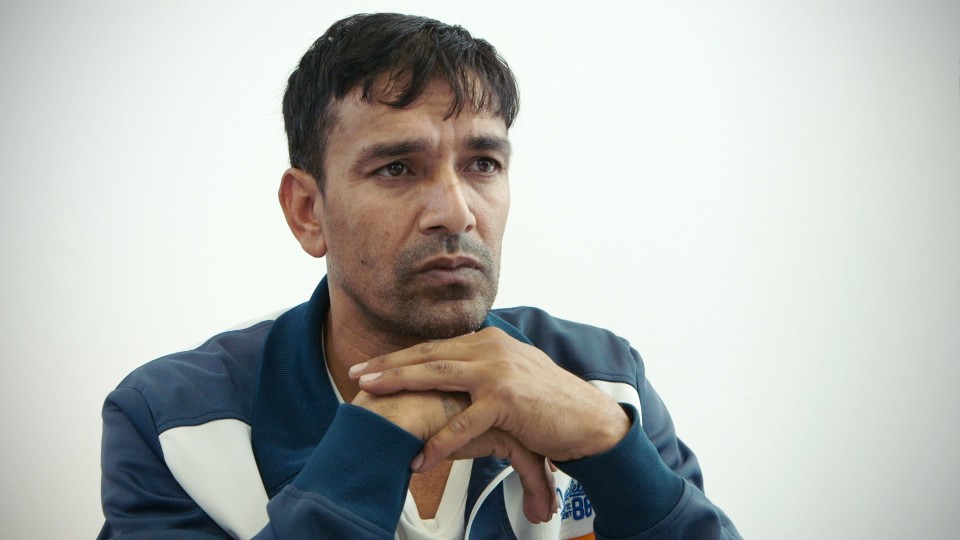 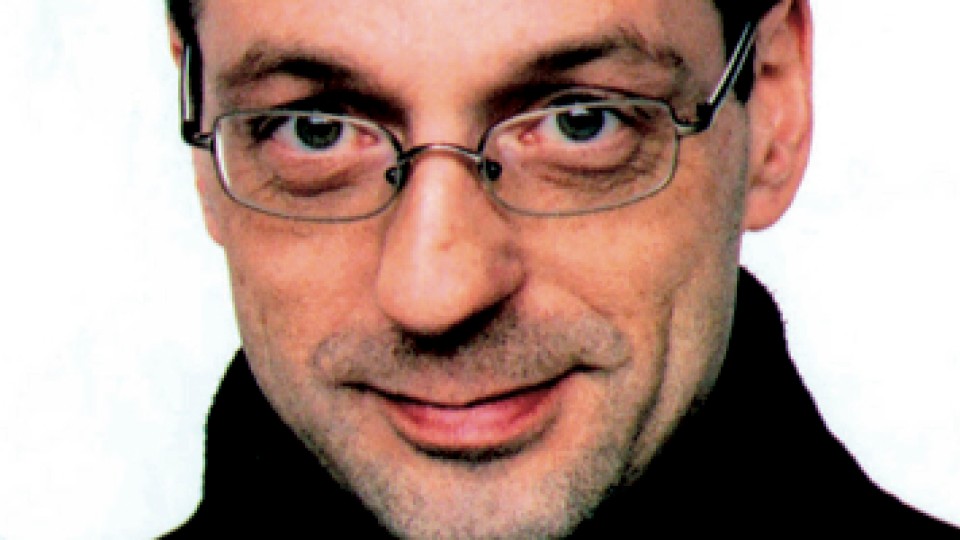 «My aim is to enable the audience to draw their own conclusions and experience the situation themselves, and I do that by making individual prejudices, aims and projections open to analysis.»