All
you can
watch
It’s a daring step for Sabine and her two sons, Hendrik and Eddie, moving from northern Germany to a village in the southernmost corner of Austria to begin a new life after the death of her husband. When their new house in Carinthia starts to display signs that invisible forces are at work, the boys find two courageous kids their own age in the village, and the gang of four set about exposing mysteries that have been hidden for years. The Scary House is Daniel Prochaska’s cinema debut, a striking bid to initiate younger audiences into horror movies with a light-hearted touch.


THE SCARY HOUSE is your first full-length feature for the cinema. How did you end up making your cinema debut with a film for younger audiences?

DANIEL GERONIMO PROCHASKA: To be perfectly honest, it was mainly a matter of good luck. In the summer of 2018 Mona Film sent me the screenplay of The Scary House to read. As I read it I very quickly fell in love with the characters. When you start seeing a film in your head while you read the screenplay, it's an extremely good sign. And apart from that, I thought it was an exciting challenge to make a children's film as my cinema debut.


Which characters did you fall in love with straight away?

DANIEL GERONIMO PROCHASKA: I found our main protagonist, Hendrik, particularly appealing because he’s different but at the same time prepared to throw himself into the new situation. And then there's the first real love in Hendrik's life, Ida. The tough, modern girl who holds the boys together. Fritz, the smartest guy in the gang, is a very stereotype character. I like it when characters are clearly delineated. A nerd with a whole lot of charm.


The title of the film suggests a horror movie or ghost film but doesn't convey the German/Austrian conflict, the comic elements, or the love story between Ida and Hendrik, which has aspects of a romantic coming-of-age. Was it partly due to your input as director that the film version of Martina Wildner’s novel THE SCARY HOUSE develops in several directions?

DANIEL GERONIMO PROCHASKA: I wanted to address the target group of 10 and upwards by ensuring that the cinema audience has a powerful, multi-faceted experience. Stand By Me is a good example of what I mean: it's based on a Stephen King story with a very dramatic subject, but at the same time it has so many heart-warming elements. In a similar way, despite the frights and the drama Hendrik is subjected to – because he doesn't want to live in this place at all – there are repeated moments when things relax. Just like in life. There's a huge potential in the character of Fritz. If Lars Bitterlich, the actor who played Fritz, hadn't plunged completely into this adventure, it wouldn't have worked. He took the part incredibly seriously and captured very well what I wanted.


The film is set in Austria, in a region of southern Carinthia which is particularly interesting because of the bilingual environment. How did you make that choice?

DANIEL GERONIMO PROCHASKA: By the time I became involved in the project it had already been decided that The Scary House should be set in Austria. In the book it's a family from northern Germany that moves to the Allgäu in the south. I felt it would be an interesting premise if a family from Germany moves to deepest Carinthia, a part of Austria where the dialect is incomprehensible to anybody outside Carinthia. That was one big change we made from the novel; the second was that the mother is now bringing up a family alone. In one of the first versions the family still had both parents. But the fact that the mother is single gives the characters more to lose. I felt it added another dimension if the family is forced into all this – the father was killed in an accident not long ago – and move to a little town to begin a new segment of their lives. Even though it's not made explicit in the film, there are times when you sense that the mother takes this huge step from selfishness but because she's trying everything to keep the family together.


In a film with children and young actors the casting always takes on a very central role. How did it work out?

DANIEL GERONIMO PROCHASKA: Casting the film was a long process, as was to be expected. When we put out a call there was an extremely wide response, so we were really spoilt for choice because so many talented children contacted us. The crucial factor with The Scary House was the interplay between the four characters: Hendrik, Eddie, Ida and Fritz. We tried out a lot of configurations before we ended up with a fine cast. The great thing about working with children is that they can't simply "take on" the character, like professionals; instead, they must have something of the figure inside them. We had two great children's coaches, Jakob Fischer and Susi Stach, who prepared the children very well. For me, the constant exchanges with them was a great support during filming. The most important thing was that the children felt properly accompanied throughout the shoot.


Another protagonist in THE SCARY HOUSE is the house itself. Did you find the basic structure in the region, or was it constructed for the film, inside and out?

DANIEL GERONIMO PROCHASKA: The biggest challenge was to bring together all the individual elements of the house. First we looked for the exterior of a real building, and we found a place in Carinthia relatively quickly. It couldn't be a classic witch’s house, because it had to have some aspect of a haunted house but also be a place that a woman with two sons could plausibly be prepared to move into. We constructed all the interiors in the studio in Vienna. The first three weeks of filming took place there. And then in Carinthia we had to hope the weather would provide light for the exterior shots that corresponded to the lighting used for the interiors. The thing I really enjoyed about the studio set was that together with our set designer Conrad Moritz Reinhardt and cameraman Matthias Pötsch we had complete freedom to invent and adapt, which meant we could be very flexible with the sizes of the rooms and stairways. We found the attic not far away from the house itself, because constructing an entire sloping attic roof in the studio would have been too expensive. In the studio we not only had the two floors of the house standing there side by side; we also had the cave where the children fall into the water, and a ramp about 6 meters long for the scene where they slide through the cave. That sliding scene was a little Goonies moment which I added to fulfil a kind of childhood dream of my own, which also underlined once again the adventure aspect of the film.


You choose a rather stylized form for your depiction of Austrian provincial life. Why is that?

DANIEL GERONIMO PROCHASKA: If you watch closely, it's all a bit over-stylized. The aim was to make an adventure fairytale. I didn't want to make fun of my characters in any way. It was important for me to bring out the culture clash on the one hand but at the same time to perform a balancing act by tightening the screw – without the characters being pushed over into the ridiculous. The fairytale element was in the foreground for me; it was intended to move all the characters slightly away from reality. Tim Burton and Wes Anderson were certainly major influences there.


You mention Wes Anderson as a reference. Are there others, particularly from genre films?

DANIEL GERONIMO PROCHASKA: I was born in 1983, which was when films like Indiana Jones and ET were launched. Those films had a very powerful effect on me. There are also references to The Goonies, which Stephen Spielberg produced. You can see influences from Wes Anderson, among other things, in my color concept. We chose the wallpaper for the house so that each room has its own color identity. Although Denis Villeneuve hasn't made any children's films, he is another of my great inspirations. In The Scary House my main aim was to move in the direction of adventure. So in that sense I’d mention Spielberg and Lukas as major influences. Stand By Me was definitely the film I watched most often during the preparatory phase.


Like your father, Andreas Prochaska, you come from a background in editing. Have you found this a good preparation for directing, particularly in genre films where timing and rhythm are of such importance?

DANIEL GERONIMO PROCHASKA: When you have spent as much time as I have in editing rooms and watching people at work, you develop a feeling for the power an image has in making a scene work. During the 10 years I spent as an editor I learnt to read actors. I think this experience has helped me to react more quickly on set, when there is so much time pressure. It gives me a certain feeling of calmness, because I know which shot I need in order to ensure the scene will work properly. My main task is to create transitions to generate a particular rhythm. I know you need something to work with in the editing room. Alarich Lenz, who was my mentor for a very long time, was the editor for The Scary House He edits with a very powerful dramaturgical sense, and he supported me when it was a question of letting go of my “darlings” in the best interest of the film.


What are the challenges in making a horror/ghost movie for a very young audience?

DANIEL GERONIMO PROCHASKA: The idea behind The Scary House was to make a scary film as a kind of introduction to real horror films. Bearing in mind that there hasn’t been a horror film for children made in Austria, that was definitely our biggest challenge. Whether we have got the balance right remains to be seen. But we definitely want the film to come across to children and adults as what it is: an adventure film with a scary factor. So you spend 95 minutes on the edge of your seat, gripped by the thrills, but still walk out of the cinema with a smile on your face. 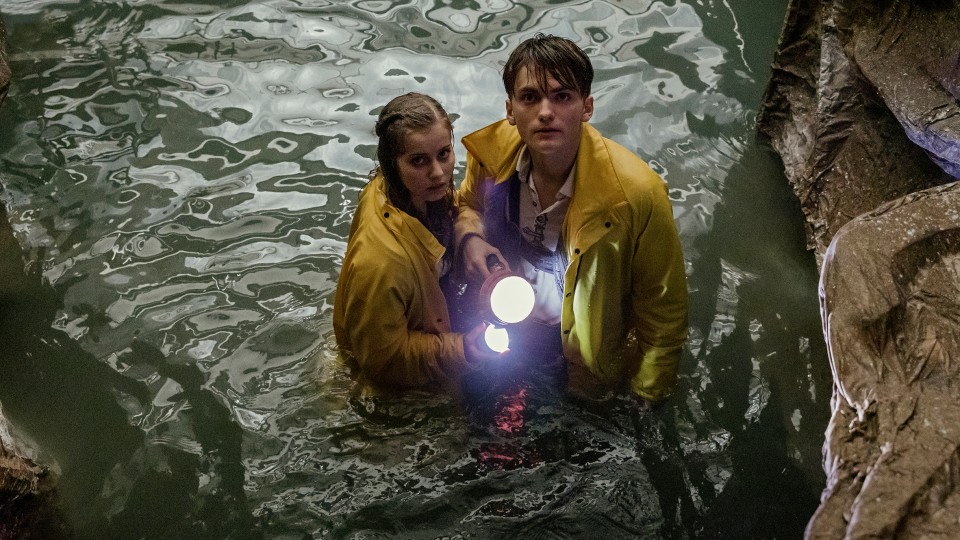 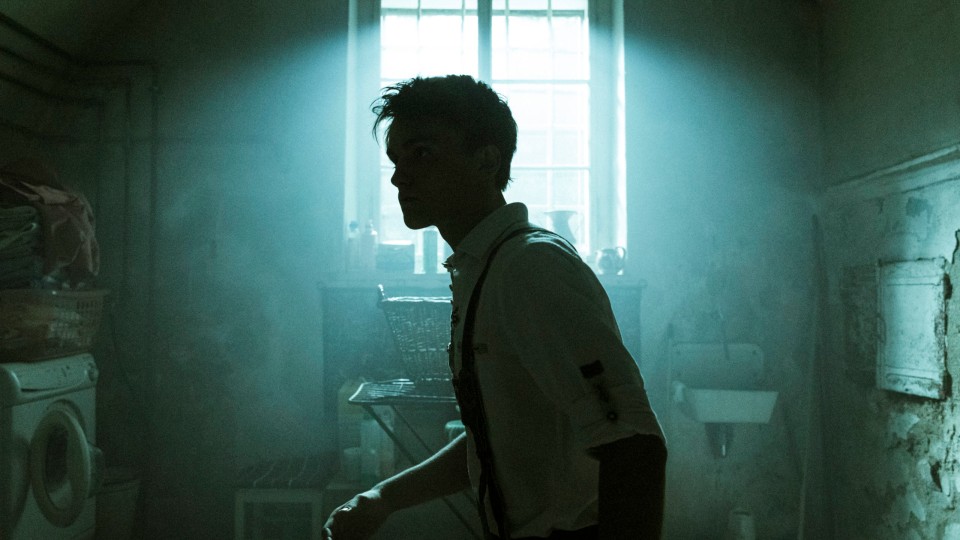 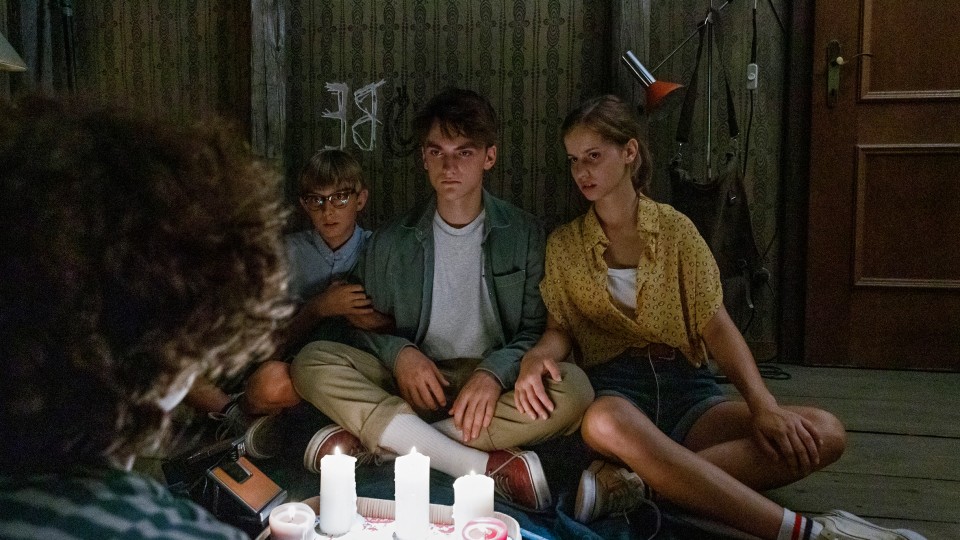 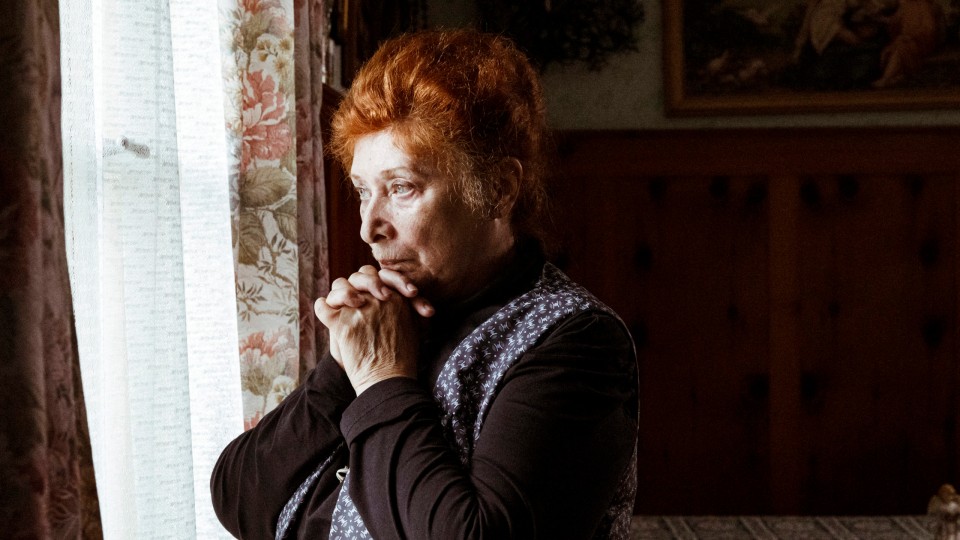 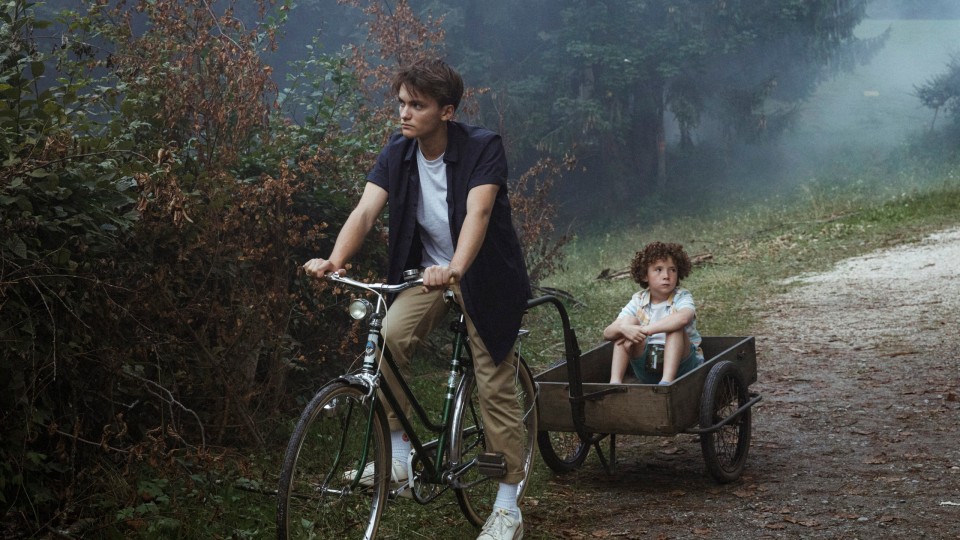 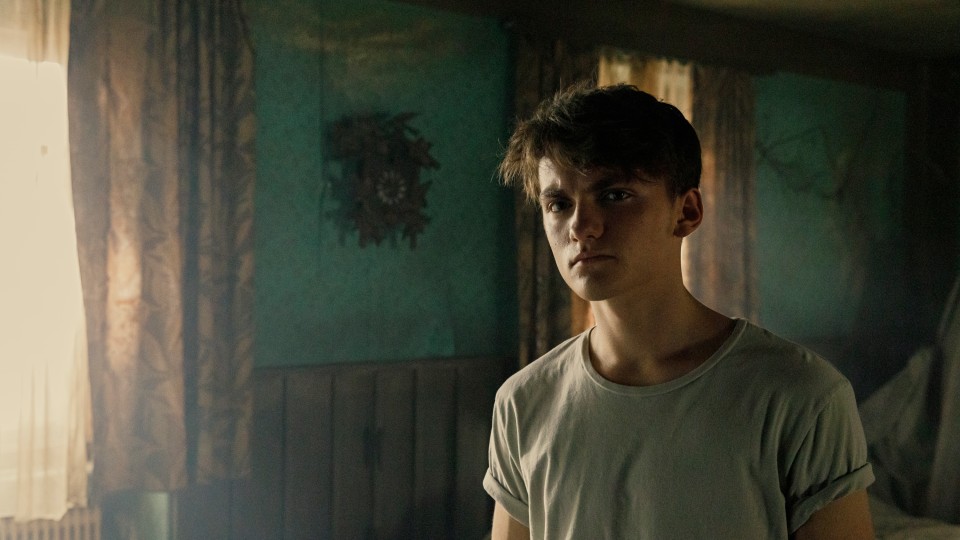 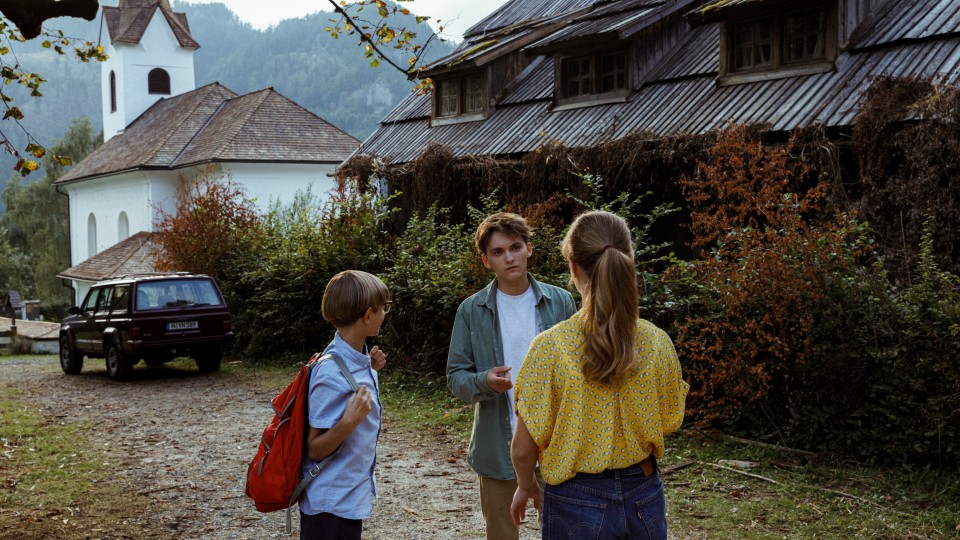 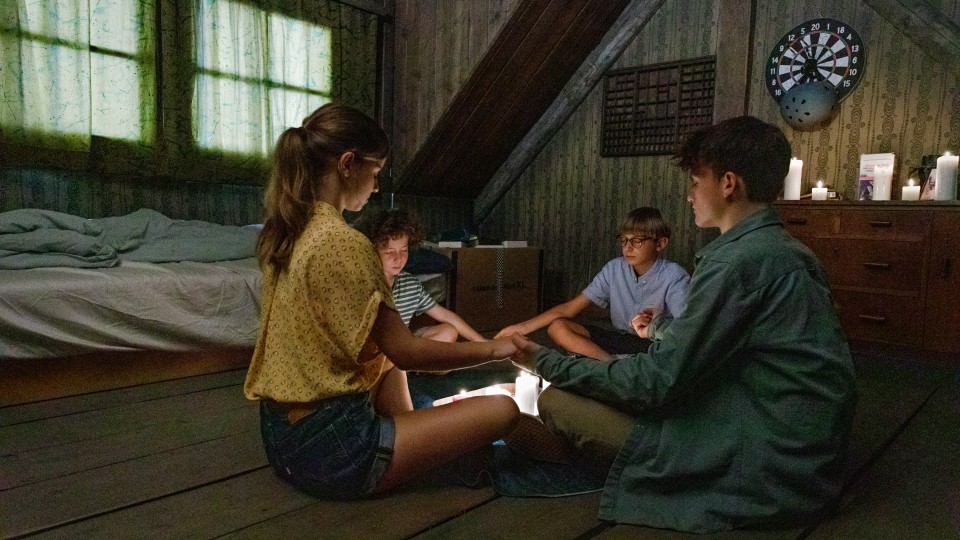 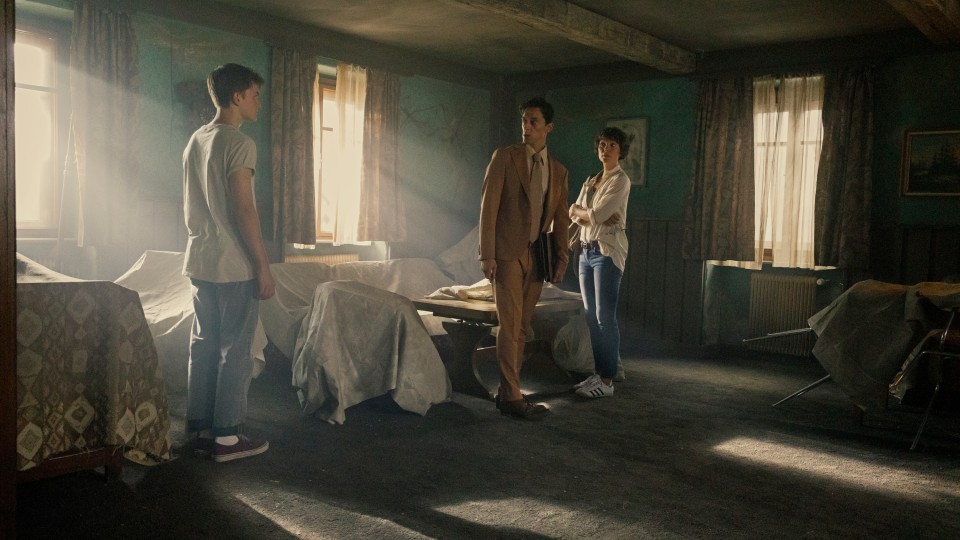 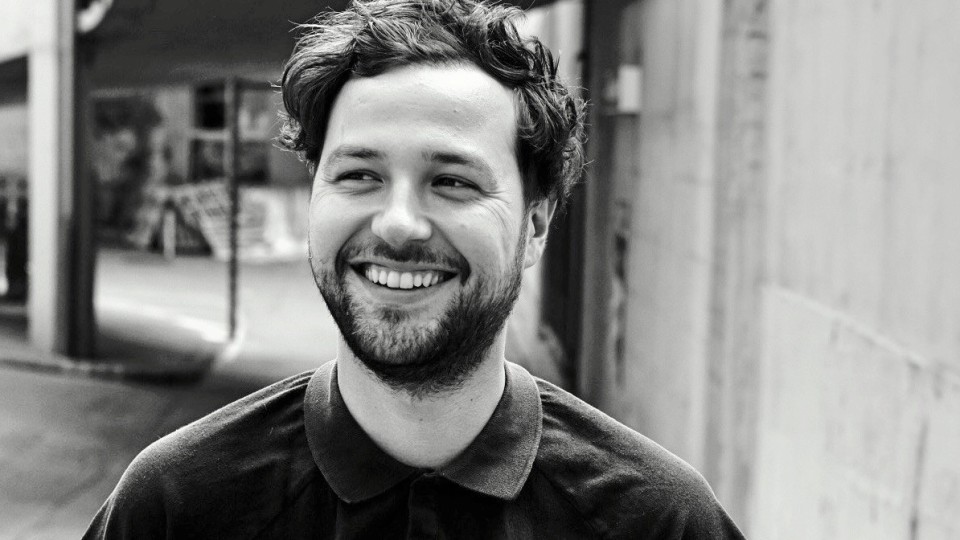 «During the 10 years I spent as an editor I learnt to read actors. I think this experience has helped me to react more quickly on set, when there is so much time pressure.»