All
you can
watch
Caricaturist Manfred Deix had an unrelenting view of his compatriots: portly and deformed in stature, lecherous, reactionary and hostile to foreigners in manner: thus the Deixian depiction of the average Austrian is preserved in countless publications. Deix’s provincial childhood in the Lower Austria of the 1950s and 60s may have provided the first impulses for his drawings; it has certainly proved inspirational for the first full-length Austrian animation film, directed by Marcus H. Rosenmüller und Santiago López Jover. Snotty Boy borrows the spirit and silhouettes from Deix’s cosmos of characters, portraying with humor and a light touch the confines of an era which resonates down to the present day in terms of certain political attitudes.


Manfred Deix (1949 – 2016) is listed in the credits of Snotty Boy as Art Director. To what extent should we perceive this Austrian artist, who became famous particularly because of his sharp, provocative caricatures, as a source of inspiration and artistic mentor for the film?

MARCUS H. ROSENMÜLLER: Before his death Manfred Deix took on the screenplay and provided a number of dramaturgical influences based on his own life story. But he enriched our work with his casting even more than in a dramaturgical sense: all the characters in Snotty Boy are taken from his creative work. We only constructed a very few new figures. There was a period when I had about 20 of his books lying around at home, and together with the producers and the creatives at the animation company Digital Light Factory, in particular Marcus Salzmann, we tried to work out who could be which character. I wasn’t involved from the very beginning: the producers – Josef Aichholzer from Vienna and Ernst Geier from Munich – came to me in 2012 or 2013 with a screenplay. I was so impressed by it that I came on board. Definitely my sort of thing: the story of a snot-nosed kid who uses his artistic talent to liberate himself from the establishment in his village. Poetic, cheeky, bawdy and surprising. A third element of Snotty Boy that we owe to Manfred Deix is his aquarelle drawing style; applying that to the aesthetics of the project was a challenge for the creative team.


Which new challenges arise for someone who can draw on experience in feature films but takes charge of an animation film project for the first time?

MARCUS H. ROSENMÜLLER: This animation project was a completely new experience for me. Many years ago I approached the job, absolutely clueless, and I’ve learned an incredible amount. I’d never have been able to do it by myself. That’s why a few years ago Santiago López Jover came on board as co-director, bringing with him considerable know-how and a huge amount of feeling for the characterization. Incidentally, I treated the characters from the very beginning the way I would in a normal feature film. Many of the processes are the same as in a live action film: working on the screenplay with the writers, questions of interpretation, creating a storyboard with a storyboard artist, and lots more. But one completely new experience was that we really had to “produce” everything. With an animation there is no location scouting, which might mean you have to rewrite a scene to adapt to the external conditions, the location. We created the village of Siegheilkirchen entirely according to our own imagination. There were some fantastic thinkers, artists and writers involved in the production, and the whole thing developed as teamwork with them. It was an incredible learning process for me. For example, when it comes to set design, I realize it’s often the illogical things that convey authenticity. On the other hand, it was crucial to analyze which authentic images would make a film no longer Deixian. What did we have to make non-authentic in order to keep it Deixian? That required a completely new way of thinking.


Deix’s artistic depiction of Austria is very unforgiving, showing a land dominated by three driving forces: untamed sexuality, Catholic hypocrisy and inveterate sympathy for National Socialism. And his perspective on human beings always has something distasteful about it. Which balancing act did you feel you had to perform to make the Deixian desire to provoke and cross boundaries appropriate for film audiences?

MARCUS H. ROSENMÜLLER: I think that a good story which addresses audiences has to be based on good dramaturgy, and it had to fit in with our financial constraints. That was the biggest challenge. The fundamental aim was to find gripping dramaturgy. If you make a Deixian film, the three aspects you have mentioned have to be in there. And it has to be said that in 2012, when I was approached, some subjects didn’t have the same contemporary resonance they do today. I never imagined how important the film would be today, and I’m not happy about the fact that certain political attitudes have once again come to the surface. These three aspects certainly make the film what it is, and they also make it worth seeing. The distasteful element is also a fact, and we allow that to show through as well. When you make a film it’s always a product of the producers and the director, so it’s also my attitude. Perhaps we toned down some aspects a little. Maybe Manfred Deix would have added something more. But after all, Santiago and I were doing the directing.


The film depicts childhood in the provinces, in Lower Austria, during the postwar period, which clearly also suggests one explanation for Deix’s view of Austria. Was it perhaps possible to transform the people in his caricatures into film characters without so much difficulty because they have a multi-faceted aspect, a personality?

MARCUS H. ROSENMÜLLER: That was definitely the case. The figures in Deix’s caricatures have depth and character, which means they’re not at all one-dimensional. However repulsive one of those figures might be, there is always the fascination of watching him, and as a result you also develop a certain sympathy towards him. It sounds crazy. But that’s what his characters are like. Deix manages to bring the inner values to the surface. Marek, for example, who is always sitting in the bar with Poldi, is a good example. In the screenplay he didn’t have a real function at first, and we chose him because we liked him. So the writer started to make him come to life, and scenes were written for him, because he is someone who becomes likeable. We allowed ourselves to be guided by the characters in the drawings in order to give them certain dialogue, attitudes and scenes.


On the one hand the film depicts something about the courage to pursue art and to break out of narrow confines. But on the other hand it also shows a political atmosphere where National Socialism still resonates powerfully, and those echoes can be heard right up to the present day. Which themes in Snotty Boy did you feel especially strongly about?

MARCUS H. ROSENMÜLLER: We are all born in a system which represents home for us. You hope you can feel safe and secure in this home, in this extended family. If you don’t feel at ease, then first you tend to blame yourself; you feel at fault because your views are different. The snot-nosed boy realizes that the values of his home are hypocritical: the regulars in the bar, the teacher and the priest, even his parents: people who will go along with anything. I hate violence, so the idea of art helping to change the world for the better – drawing caricatures, in the case of the snot-nosed boy – is hugely appealing to me. And even though the snot-nosed boy doesn’t succeed in changing others, there’s a certain satisfaction that he has changed himself and his life. And that’s my belief: that I should question the values I’m born in and therefore take some responsibility for the world.


The shabbiness typical of the post-war period is captured very impressively, and so are the faces of the characters. On the one hand you have the extremely distinctive Deixian physiognomy, but is also the face of Mariolina, who is a beautiful girl without copying the perfect facial expression of Disney characters.

MARCUS H. ROSENMÜLLER: A long time before the debate that is preoccupying everyone right now, there were always powerful female figures in my films. Natascha, Mariolina’s mother, is based on Marietta Deix, and we were particularly keen to convey the fact that alongside our snot-nosed boy, who is pretty insecure, the real “cheeky brat” is Mariolina. It took us a very long time to find the characters we invented – snot-nosed boy and Mariolina – because they didn’t feature in Deix’s cosmos of characters. As far as the Deixian characters are concerned, I’d compare it to a normal casting process – with the same problems that come up in real life. For the village it was important to us that it didn’t look too neat and tidy, so you should always sense that the façade is crumbling, the society inherently fragile.


Were there some moments where you experienced animation as a more expressive form of film narrative? And where did the opposite happen?

MARCUS H. ROSENMÜLLER: To be honest, this work has made me venture much further into the world of animated film; I have watched a lot of films that I had neglected previously. I’ve only now realized what a wonderful world that is, and what opportunities it provides. On the other hand, the work itself is less personal. There’s no interaction with the actors, which is something I value particularly in live action films. But I couldn’t say right now whether I prefer one film world or the other. They’re two different worlds, and on top of that I make documentaries now and then; I think each of them has its advantages. But with animation films you can only convey the ideas in your head if you have the appropriate budget. On the other hand, I have to admit that creative solutions can be found if there is a shortage of finance, just like in feature films. Without Santiago López Jover and all the creatives the film would never have become what it is, and I definitely underestimated how long the work would take.


Did animation prove to be the ideal medium in order to do justice to an artist like Manfred Deix?

MARCUS H. ROSENMÜLLER: That certainly was the crucial factor. I remember clearly that my first reaction was to think: yes, the screenplay is a super story, so why don’t we try to make it as a live action film? But it quickly emerged that precisely because the film characters were developed from Manfred Deix’s caricatures, an animation film would be perfect. And of course it’s great that a film about Manfred Deix, inspired by him, has become one of the first full-length animation films in Austria. Precisely because his artistic work is so outstanding. He’s a really great artist. I am also proud that the producers came to me with their suggestion that I should be involved. I myself have spent a huge amount of time with regulars in bars like that in Siegheilkirchen, and I also included these impressions in Grave Decisions. That world wasn’t at all alien to me. I felt pretty much at home there. The essence of Deix’s characters applies just the same way to us in Bavaria. Oh sure. 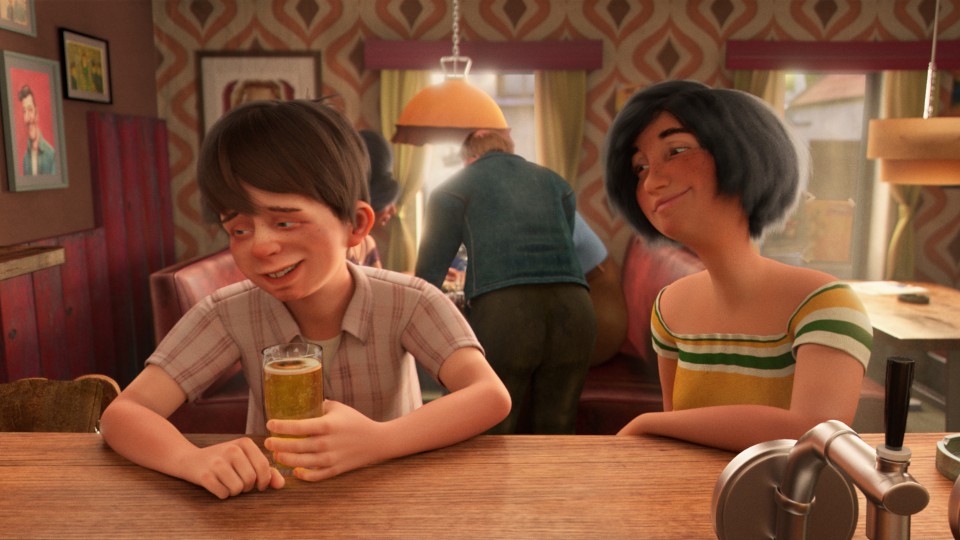 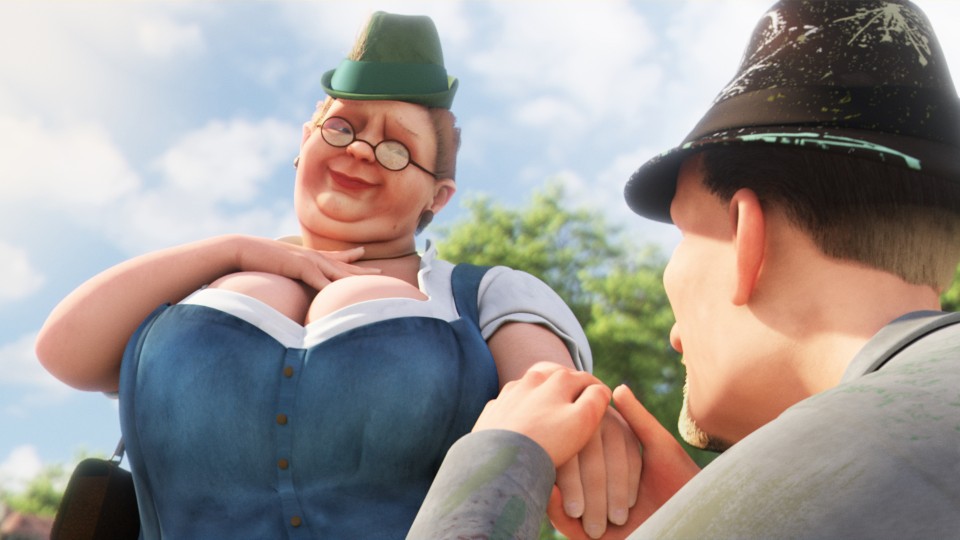 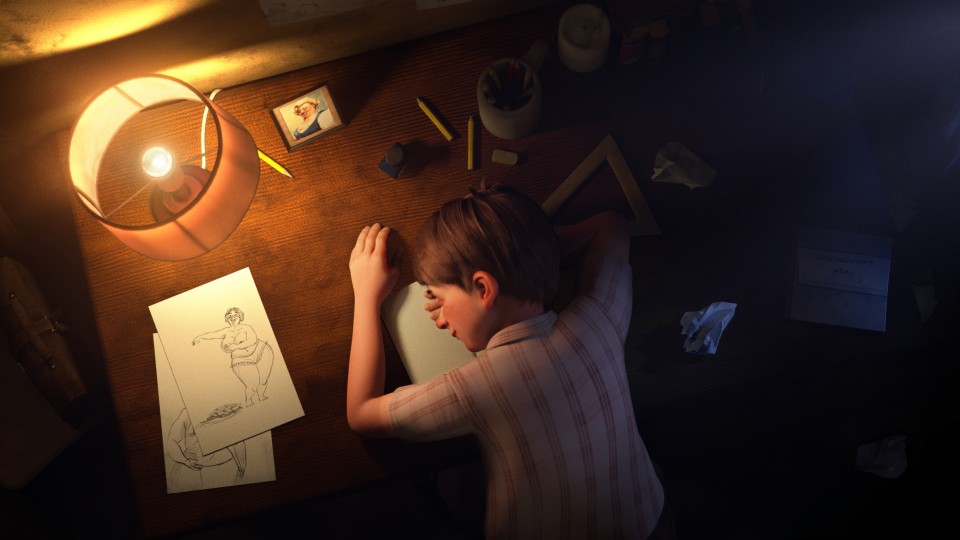 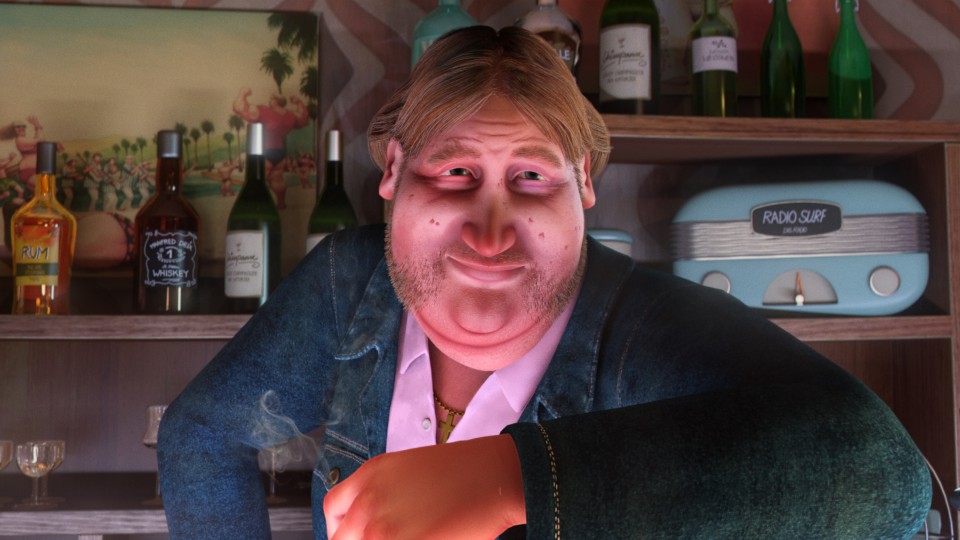 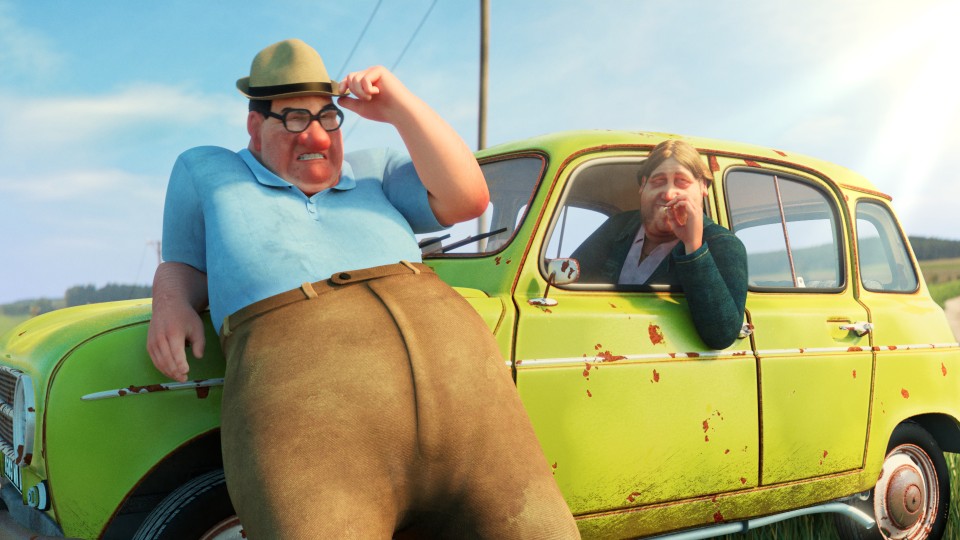 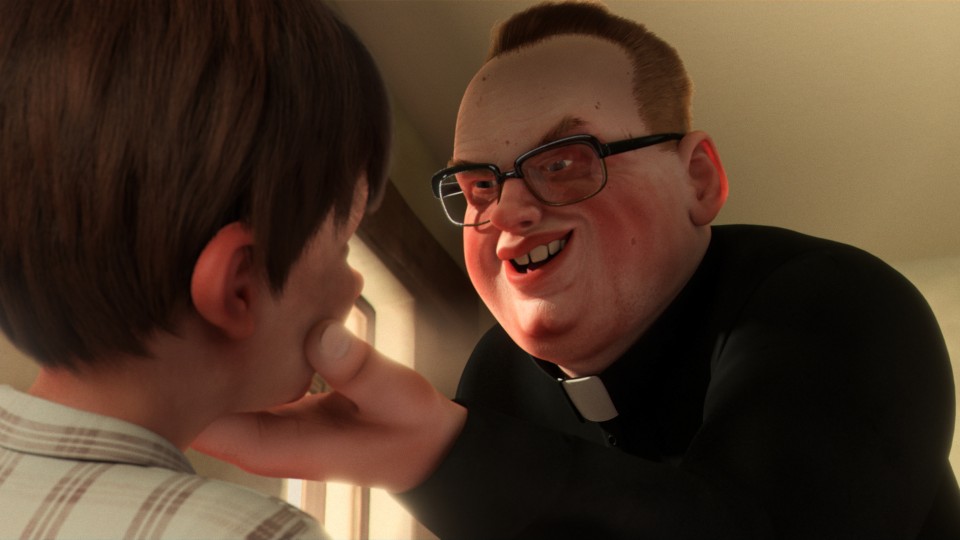 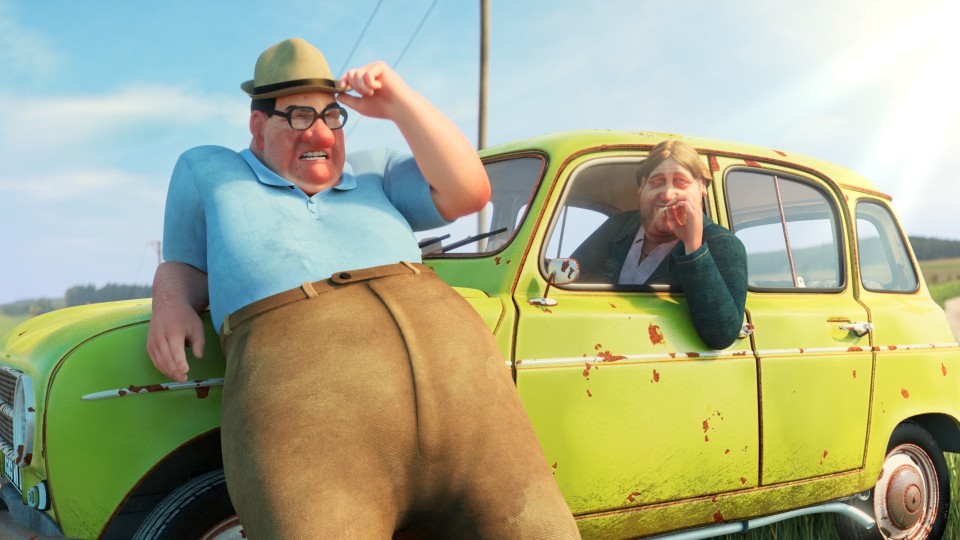 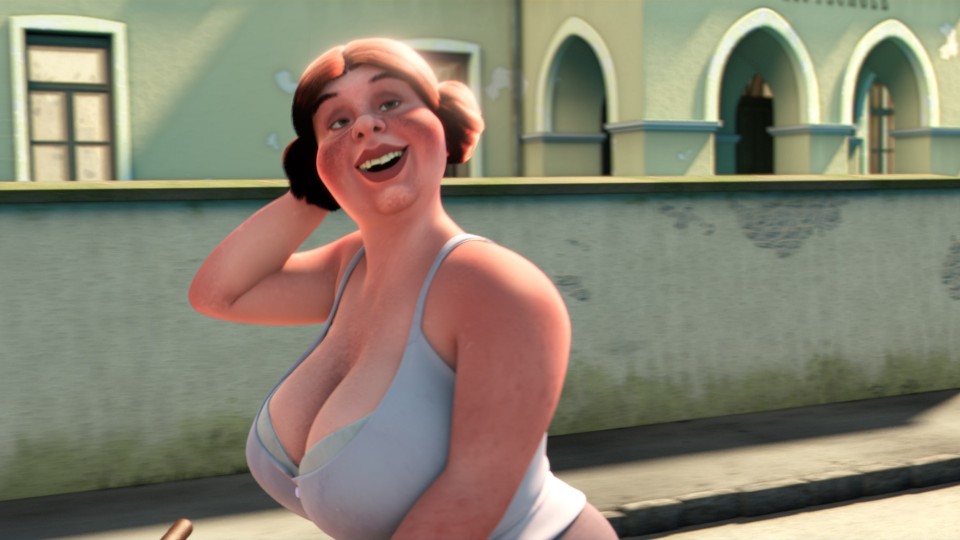 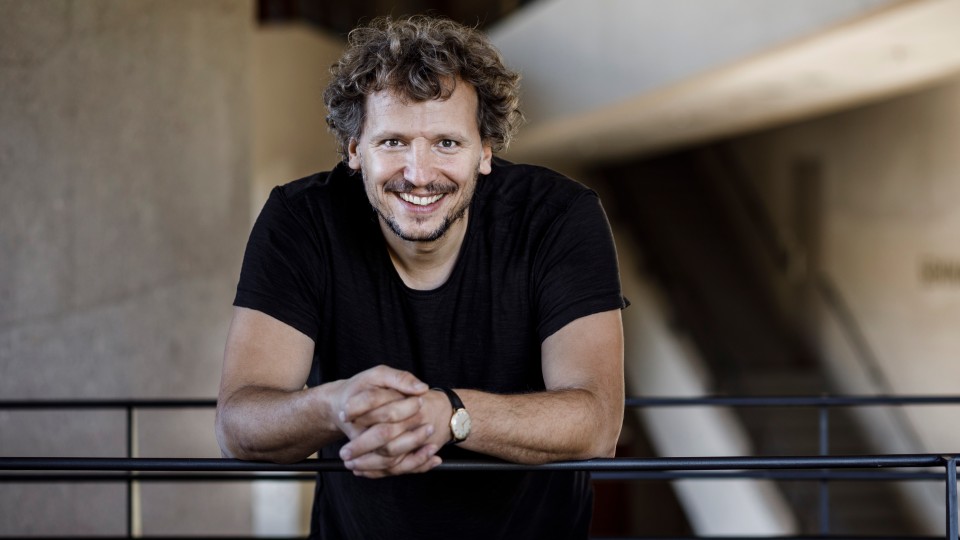 «The figures in Deix’s caricatures have depth and character, which means they’re not at all one-dimensional. However repulsive one of those figures might be, there is always the fascination of watching him, and as a result you also develop a certain sympathy towards him. It sounds crazy. But that’s what his characters are like. Deix manages to bring the inner values to the surface.»