All
you can
watch
Arnold is a renowned architect. His projects venture higher and higher into the sky, and his family life also appears to be a flawless edifice. But it turns out to have extremely fragile foundations when his wife tells him one day that she needs a donor kidney. Inspired by the theatre piece Die Niere, Michael Kreihsl puts a single question to two sound couples in Risks and Side Effects and catapults them out of their structured happiness.

One of the main protagonists in your new film Risks and Side Effects needs a donor kidney. A fragile and extremely volatile interplay of forces develops around this issue, a network with the protagonists in the center. What lines of enquiry did the subject throw up for you, prompting you to develop a screenplay about it?

MICHAEL KREIHSL: The film is based on a play for the theatre, Die Niere (The Kidney) by Stefan Vögel. From the first moment I read the play I couldn’t get the subject out of my mind, especially the question it raised: what would be my reaction if my wife suddenly walked in and asked me to donate one of my kidneys? Would I immediately agree, unconditionally, or would fear for my own life make me evasive?
It seemed to me that if a play written for performance on stage succeeds in creating three-dimensional characters with all their facets, the likeable and less likeable sides, it could provide the basis for a film. It’s a well-made play with people in an extreme situation, so perhaps it would also work on screen, because it involves an interesting existential question that is really haunting.


Liebe möglicherweise (Love Maybe), the title of one of your recent works, seems to sum up the subject that your films frequently confront: the fractures beneath the surface of many relationships, despite glowing outward appearances. Could this be described as the issue that moves you as a filmmaker, that you wish to engage the audience in dialogue about?

MICHAEL KREIHSL: What interests me could best be summed up by the phrase “human behavior”. These interpersonal relationships, these grotesque, convulsive contortions that people perform in an attempt to be happy – which often tip over into the opposite. Chekhov once wrote: “People don't go the North Pole and fall off icebergs. They go to the office and quarrel with their wives and eat cabbage soup.” I found that extremely apposite. Because the drama concealed under the surface could be compared to an iceberg at the North Pole, with most of it invisible beneath the surface. I’m interested in the abysses, the attempts to conjure up happiness that go wrong – but still prompt people to try again and again in the same way. Do we as human beings ever learn from relationships?


Risks and Side Effects is based on a play, a chamber piece to be exact. What issues have to be confronted when you adapt material conceived for the theatre to create a work for the big screen? Where did you expand the story for the cinema?

MICHAEL KREIHSL: In the theatre an actor puts on a cardboard crown, and we believe he is Richard III – for three long hours on end. In films like Risks and Side Effects that doesn’t work. You have to work every second to attain that plausibility. The cast must be precise and at the same time playful in order to bring their emotions to the screen. I expanded the material by adding a daughter and her boyfriend; in the original play there are just the two couples. These new characters bring about a different dimension and supplement the emotional environment surrounding Kathrin and Arnold. Another addition was to have Kathrin experiencing the fear herself and acting as result of that. She really does believe at the beginning of the film that she needs a donor kidney, and it’s only the ambivalent “behavior” of her husband that prompts her notion of vengeance – which you can then also identify with better, because she really was scared to death. To have her instigating an act of revenge against her husband when she didn’t need a kidney at all – as in the play – would have made her one-dimensional and uninteresting in the film. Arnold also has a good core, but he’s an egotist; he’s almost autistic, simply accustomed to bulldozing his way through conflicts, and he immediately wants to use an agency to get rid of this “problem”. He tries to outsource his emotions. He doesn’t want to “discover himself”. None of my characters can be reduced to a black and white schema; they all have both within them. And I have to be able to like my characters; they must all have the same chances, so we can get closer to them and find ourselves within them.


Arnold, the main protagonist, is an architect – a profession that permits interpretive approaches on different levels. Which opportunities did Arnold’s profession create within the film, and what demands did it place on set design and location search?

MICHAEL KREIHSL: We spent a long time looking for an “architect’s house” that could be appropriate for our main characters. We finally agreed on this villa, which we felt was extremely suitable. We were lucky in that construction work goes on almost permanently in Vienna, and the shell of a large construction site was available, which has an almost symbolic dimension in reference to our architect’s inner life. He’s always building, he always wants to get higher – and without straining the popular jokes about constructing towers, there is an amusing aspect to that in the film. Arnold doesn’t have the slightest idea how impossible he is. He lives in a parallel world, and he has lost contact to everyday things and his real emotions. Maybe he can’t show them – or maybe he never has them. He is one of those people who only ever sees himself reflected in others. Risks and Side Effects constantly alternates between the female and the male perspective. Ultimately the female point of view clearly gains the upper hand, and the end of the film represents a logical conclusion: independence and emancipation.


In the constellation of the four characters Arnold/Kathrin and Diana/Götz, there’s one person who is not defined by his work. And he’s the one who acts with humanity, the only one who isn’t calculating. What does Risks and Side Effects  also say about the extent to which professional life overwhelms the human level?

MICHAEL KREIHSL: It’s like the quotation from the Bible: “It is easier for a camel to go through the eye of a needle, than for a rich man to enter the kingdom of God.” Why are some people lacking in empathy? Why are others helpful without demanding anything in return? The film also makes the point that Götz is dependent on harmony, but isn’t it precisely people like him who maintain the balance in the world between the just and the unjust? I don’t think it’s just the professional aspect of a social group that overwhelms the human level; I think it’s more about the characters concerned. Arnold might say: “character is destiny for me”. If he loved his wife, if he had empathy, everything would have turned out differently. Conducting a relationship the way you manage a firm is doomed to failure.


How did you make the necessary decisions in the casting process?

MICHAEL KREIHSL: I wanted to work with people who don’t see collaboration as a one-way street. I am a simultaneous interpreter of the natural; that’s my job, and doing it properly requires a suitable partner. Acting is like being a musician: the challenge is to play a Bach sonata as though it has just occurred to you, as though you had invented it that very second. I had wanted to work with Samuel Finzi for a long time. He’s a pedigree actor who has played at many of the largest theatres in Germany. He displays a lightness in serious matters, and the other way round. I remember Inka Friedrich clearly from Andreas Dresen’s Sommer vorm Balkon. She possesses an interesting combination of control and comedy. While Arnold constantly tries to wriggle out of things, she speaks in clear sentences. In the part of Kathrin she is very controlled and analytical. Pia Hierzegger has an unerring instinct for the dry comment and a fine intuition as an actress. She carries a mystery within and exudes a particular aura. Thomas Mraz moves in front of the camera like a fish in water, and he has an instinct for sensibility. With him I don’t have the feeling I’m doing my job as a director; I just watch in awe.


The to-and-fro about the donor kidney reveals in very amusing fashion how differently women and men deal with serious diagnosis. How important was the comic aspect to you, despite the dramatic situation?

MICHAEL KREIHSL: I like the eccentric-comic aspects of dramatic situations. Good comedies are about people who flounder around in response to an emergency, and down in the audience we find that amusing. Comedy is always deadly serious. The characters have to act as though their lives were at stake, and I never let them go before they’ve achieved that. Chaplin was a genius, and he was always deadly serious. His films are often about poverty and persecution, but you find yourself laughing. Laughing is a coping mechanism; after all, you frequently laugh because there is nothing at all to laugh about. In my film Arnold slips straight into the role of the pretentious patient who demands immediate care and attention; he lies on the sofa, he can’t go to the office, and he can feel all his organs and body parts. In contrast, Kathrin treats the same situation in an analytic manner, without much fuss. I think women handle difficult situations more constructively, in many cases, with less paranoia about finding an immediate resolution. Perhaps one shouldn’t generalize But on the other hand, why not? I think some men behave far more hysterically than women.


It emerges in the end that precisely the social and the family construct surrounding this over-ambitious architect collapses like a house of cards.

MICHAEL KREIHSL: Although Arnold constantly constructs foundations, he forgot to work on his own foundation. He failed to ask himself about the condition of the relationship he had built up. In that sense it’s just a logical progression when his wife liberates herself and draws her own conclusions from his behavior. We don’t know with any of the couples exactly how things will carry on with them, but as we leave the cinema we are confronted by the question: “And how are things with me in my life?” 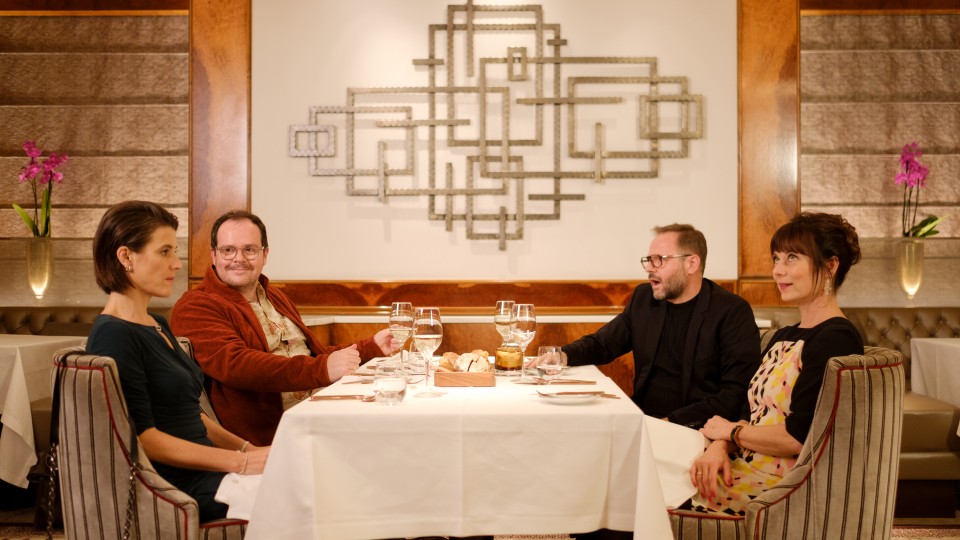 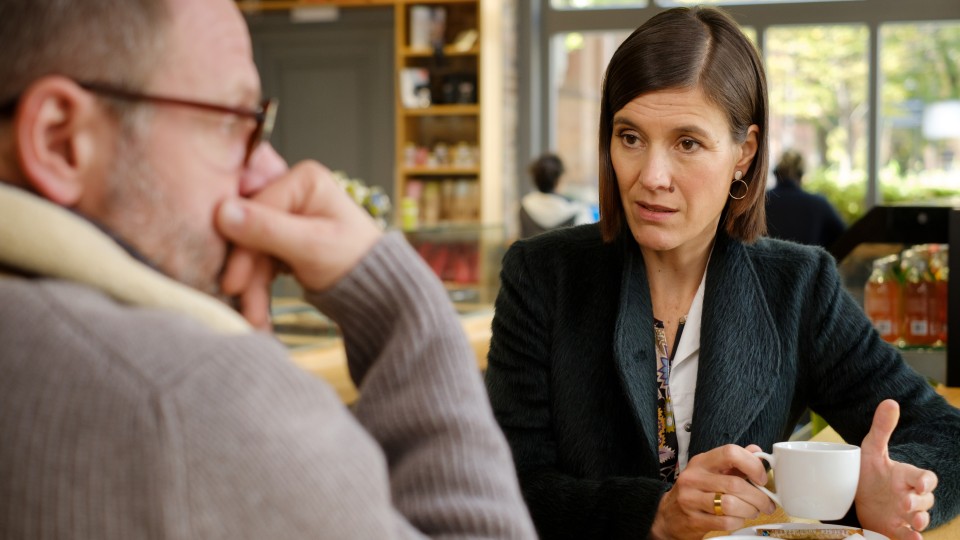 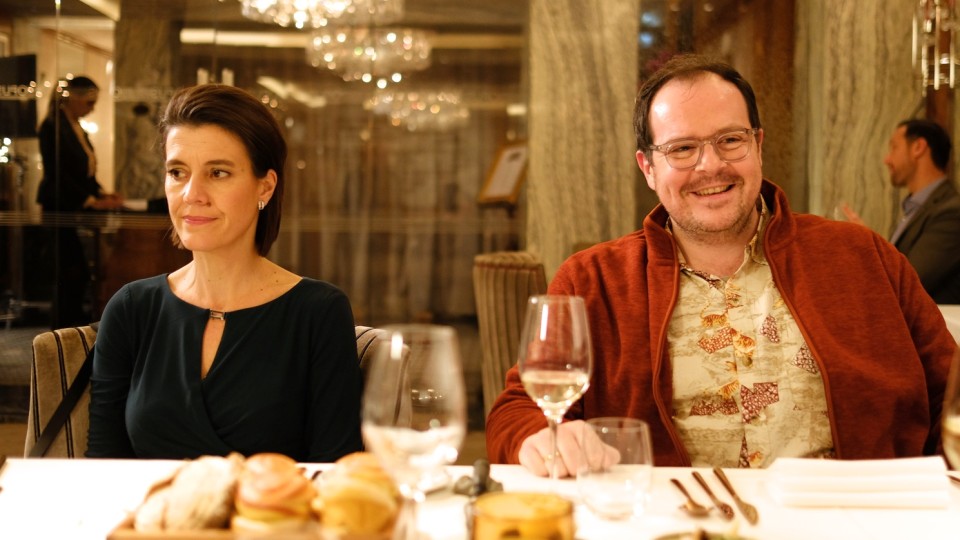 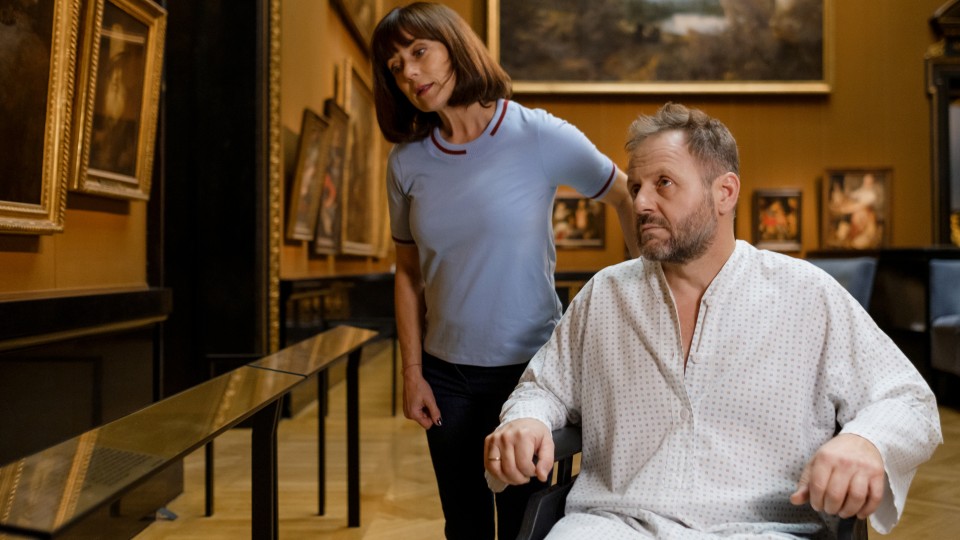 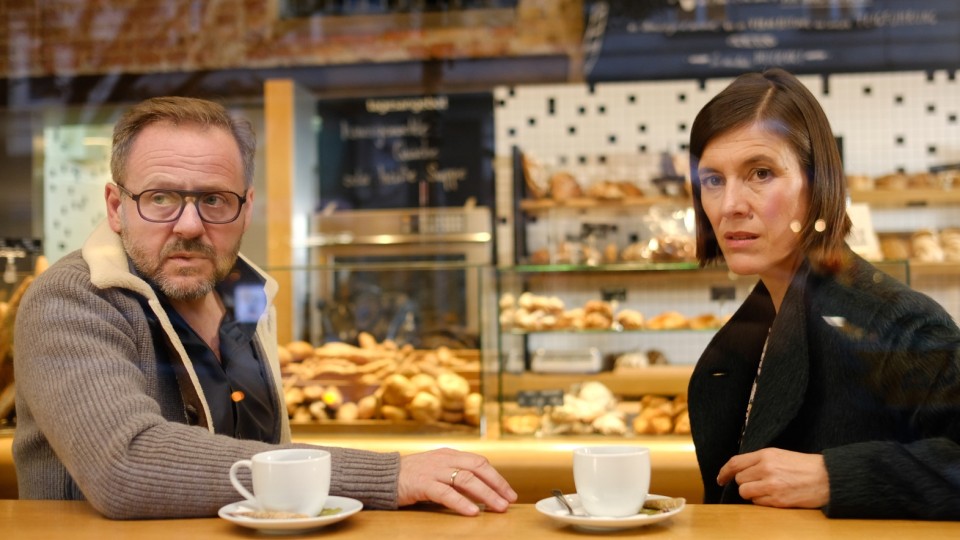 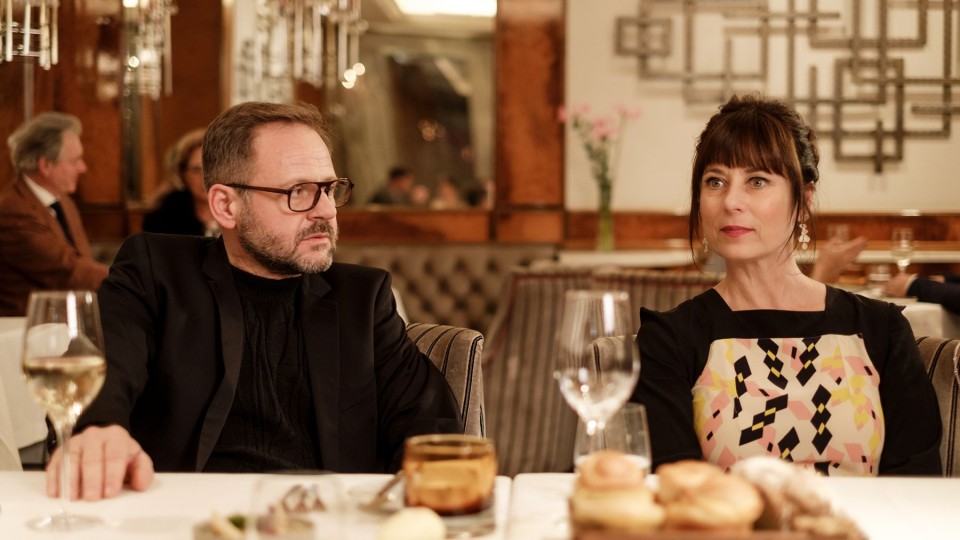 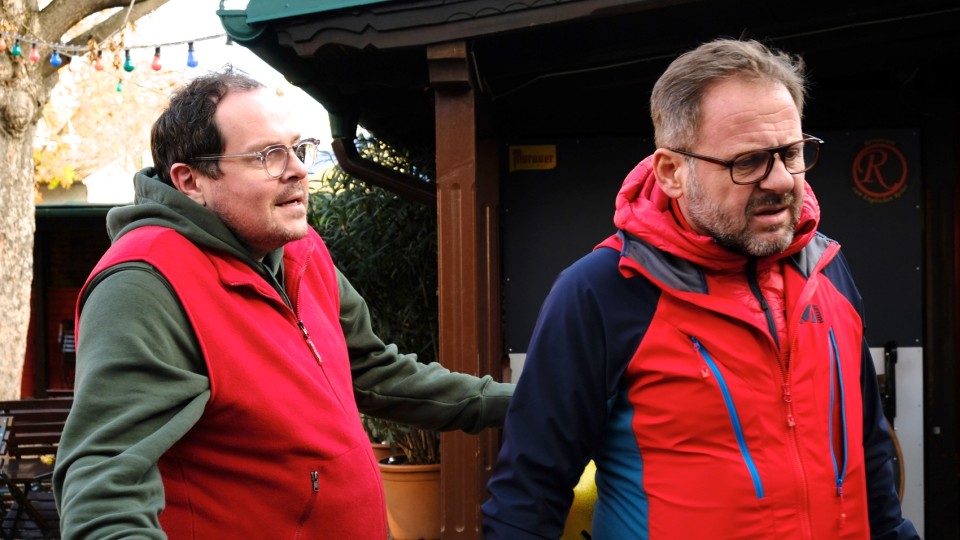 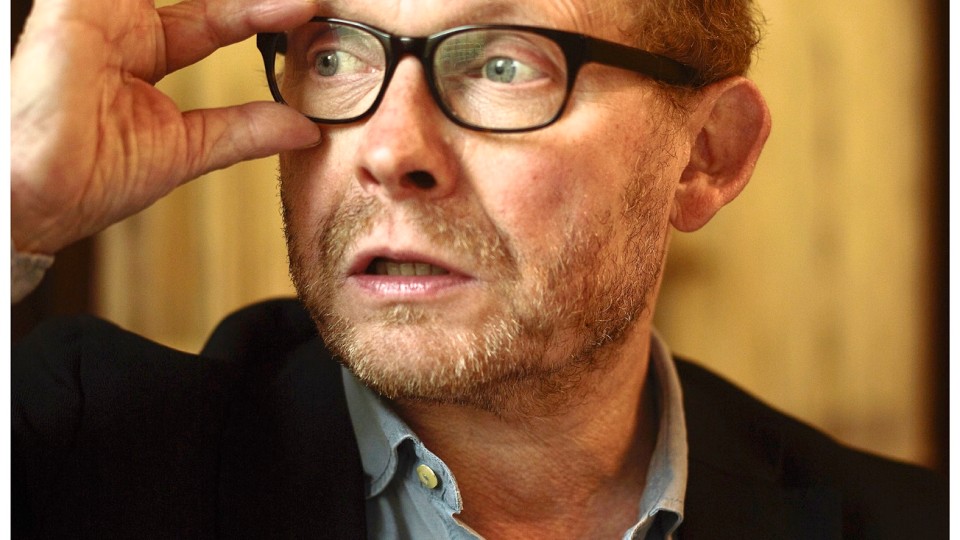