All
you can
watch
Pavel Cuzuioc travelled through Romania, Bulgaria, Moldova and the Ukraine, accompanying telecommunications technicians on fieldwork as they went about their task of connecting people with one another and with the world by means of cables and sockets. The working journeys from door to door become voyages of discovery from microcosm to microcosm, and Please Hold the Line emerges as a witty and enigmatic essay about the human yearning for connection, failure of communication and existence in a wait loop.


Please Hold the Line is set in the Ukraine, Romania, Bulgaria and Moldova. Was it the multilingualism and constant cross-border travel that provided the impulse for your essay about communication?

PAVEL CUZUIOC: The geographical situation wasn't really as decisive as my personal connection to the area. I was born in Moldova and saw the sea for the first time in the Ukraine. Bulgaria is the country I went to on my first journey abroad, and I first studied in Romania. These are four countries whose culture and society have had a decisive influence on my mentality. They seem very similar at first glance but are in fact all unique. As a "Soviet Romanian" (born in Bessarabia) who has one Romance and once Slavic language as his mother tongues, I was also able to conduct the shooting in the four countries easily. The location is only significant for me in that I can move around easily, and I know the languages. That enables me to conduct research and to keep my eyes open. What always matters to me are the people. I want to make it very clear that we are all equal and yet each person constitutes a world of his own, an individual planet. No matter what sophisticated means of communication are available, we continue to understand each other with great difficulty because everyone has their own perspective on life and an individual way of expressing himself. As far as I'm concerned, language is the constant source of many problems. My protagonists, telecommunications experts on fieldwork, were tour guides through society for me.


Two of the technicians are powerful personalities who lead us through the film. How did you come to meet them, and how did they agree to let you accompany them?

PAVEL CUZUIOC: There are four countries, one protagonist in Moldova, one in the Ukraine, two in Romania and two in Bulgaria. You could regard the two technicians from Moldova and Ukraine as the main protagonists, but I didn't really want to place any of them in the foreground. I simply wanted to show them the way they were. Since the technicians in Moldova and Ukraine were travelling alone, opportunities for personal conversations – and for establishing a friendly relationship with them – arose more easily. It isn't easy to keep a balance between the protagonists; inevitably at some point one of them stands out more. In Please Hold the Line that is perhaps Ghenadie from Moldova, mainly because of his monologue at the end of the film. He says very simple things in sincere language with a lot more sensitivity than someone who might be able to speak better and has the same views.


Their maintenance work takes them to a whole series of customers. This also raises the question of which customers become protagonists. How long did you accompany the technicians on their journeys, and how did you decide when to start filming?

PAVEL CUZUIOC: As far as the customers are concerned, this was certainly my most exhausting project to date, because I had to knock on about 200 doors. 70% of the people opened up, and 5% of them were interesting encounters who ended up in the film. At first I was with the technicians from morning to night, putting the camera on a tripod and then perhaps helping them out with their work. After that preliminary filming I realised it would be best just to accompany the technicians and wait until they came across interesting customers and characters. And at some point the technicians also came to understand what I was looking for, and they started striking up conversations with the customers of their own accord. I began the project with a number of ideas, and as time progressed it became more focused and took on its own shape. Then you find what you're looking for – the extraordinary among the banality.


You do the camera work yourself, and you work with fixed camera positions. The tableaux convey a great deal from the composition of the shots: the connection between life, architecture and people seems to be a kind of premise which unites the individual and social aspects. In your spontaneous mode of working what does the search for the ideal frame look like?

PAVEL CUZUIOC: When I work alone and at the same time communicate with the protagonists a lot, it creates an aesthetic where things move within the frame rather than the camera looking for them. I can't repeat things either. You have to compose the shot and be very sure about exactly what you want. That often necessitates technical compromise. Perhaps there's too much shade on the left because the lens can't cope, but I have two protagonists in focus and good quality sound. That way I can concentrate on the content and on directing. The less fuss you make about things like that, the more relaxed the protagonists are in their behaviour. I also think there’s a lot of significance in the second and third level of an image. Whether you hear a crow off screen or there’s an apartment block in the background. As I said earlier, each of us is a little planet, but we all exist within a galaxy as well. Every second or third level in a frame is an important component in bringing out the foreground.


One striking filmic element is the picture within a picture, as displayed on a TV screen. To what extent did chance play a role here? A recurrent motif is reports about kidnappings, robberies, murders – which happen all around the world and are both local and global at the same time.

PAVEL CUZUIOC: Bad news conveys the feeling of a thrill. The business with the two girls who were kidnapped and then murdered was a huge story in Romania the year we were filming, and as a result of it a minister and a senior civil servant were fired; it also featured in the media in Austria. Everybody consumed that story, and everybody had an opinion about it. Samira Ghahremani and I considered while we were editing whether we should construct a dramaturgy on the principles of Chinese whispers, because in my view a great deal in society functions on the Chinese whispers model. At some point you no longer know who said or did what, what is true and what is a legend. Technology becomes increasingly sophisticated and more efficient, but we human beings haven't fundamentally developed any further. We consume so many reports and seem to have become immune to good and evil. Many of the images came about by chance as we were filming and became intentional during the editing process. I film on a documentary principle but edit on the basis of fiction.


Towards the end of the film there is a brief edited sequence about the signing of a contract – one narrative element among many. Where did you place the dramaturgical emphasis during the editing?

PAVEL CUZUIOC: It wasn't easy, because a lot of openings could have presented an interesting perspective. If you look more closely at the structure of Please Hold the Line, you see that it represents one day. The technician goes into the office, gets a list of customers, and the day ends with the concluding of the contract. The field technician is also a kind of devil’s advocate: in his monologue Ghenadie questions whether there’s any justice in the world while at the same time encouraging the customers to conclude a pact with the network operator: “with the devil” would be going too far, but with a world that relentlessly pushes us forward. Every signature creates a climax in its own way. And I also wanted to let the protagonists appear again. I worked very intensively on the editing with Samira Ghahremani, and I always let myself be guided to a great extent by instinct. I became very involved as well. One further element is a small homage to the closing credits. At the end of Please Hold the Line there is a scene where the credits are rolling on a TV show, and our credits begin over that image – closing credits over the closing credits, you might say.


To what extent did the filming bring out your personal relationship to the region?

PAVEL CUZUIOC: I always like going there and dislike being there. I like the people. Their simplicity. It's a part of me, my family. The borders in Eastern Europe – just as throughout Europe in general – are partially blurred. And after all, borders are just constructs in our heads: they don't really exist. We have achieved something by means of globalisation, but not the most important things.


«Communication is everything,» says the Romanian priest, who also appears to be reflecting on the spiritual union of word and being. Is he summarising to a certain extent the whole problem with language?

PAVEL CUZUIOC: The character of the priest also represents for me a kind of medium in the communicative sense that existed long before books or radio, someone who manipulated people by means of sermons. We wanted to get a line on his thought process and place a full stop at the end of it. But it wasn't possible; he spoke for two hours. It was logorrhea. He speaks very well even though you can't really understand what he's trying to say. He gives himself the air of a prophet. During that sequence I deliberately introduced kitsch images of doves flying across the sky in slow motion as a little commentary, an attempt to unravel his words without discrediting him. If I came to realise anything during the filming of Please Hold the Line it was that we shouldn't take ourselves so seriously. We think we are far too important. 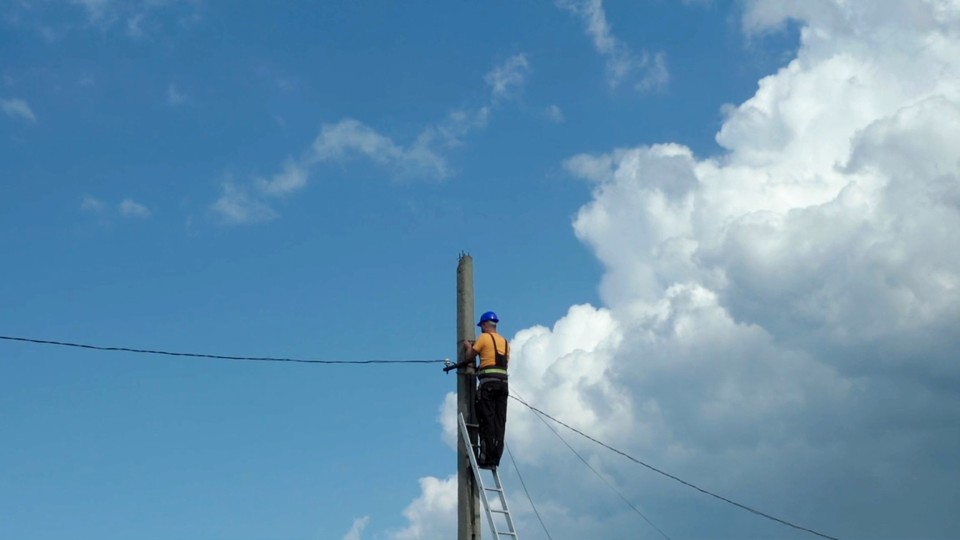 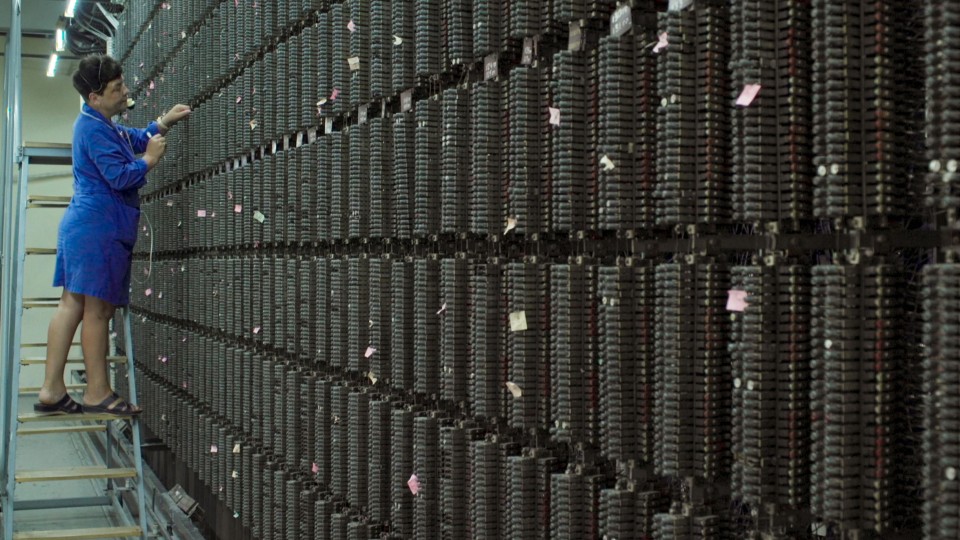 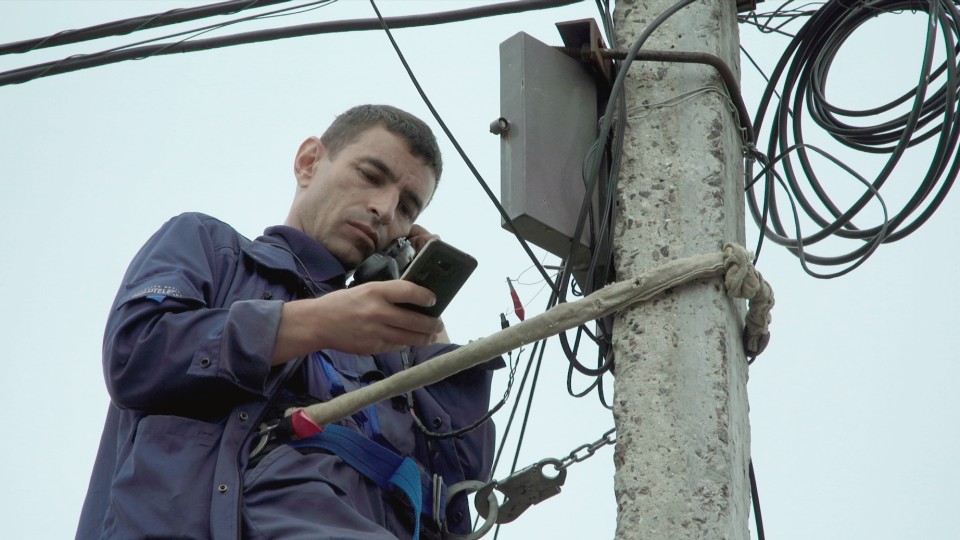 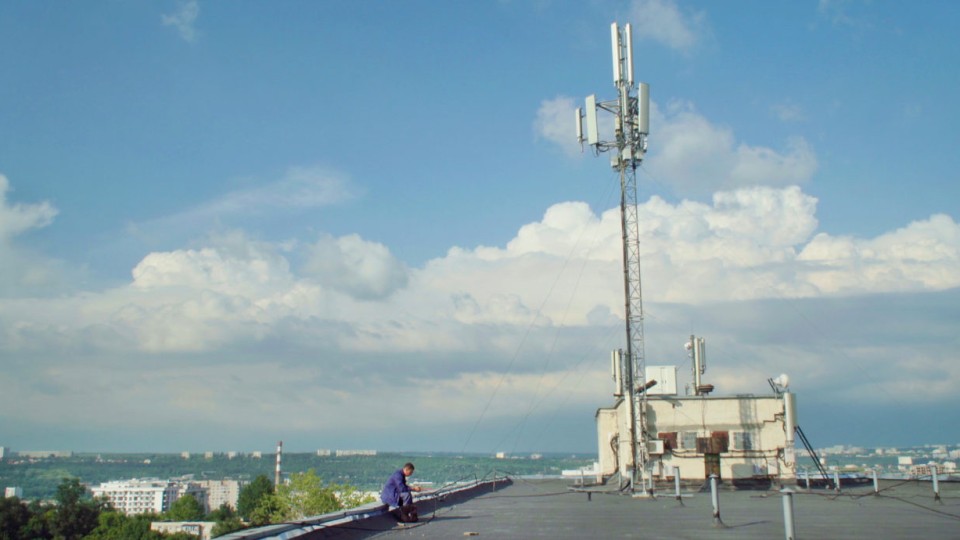 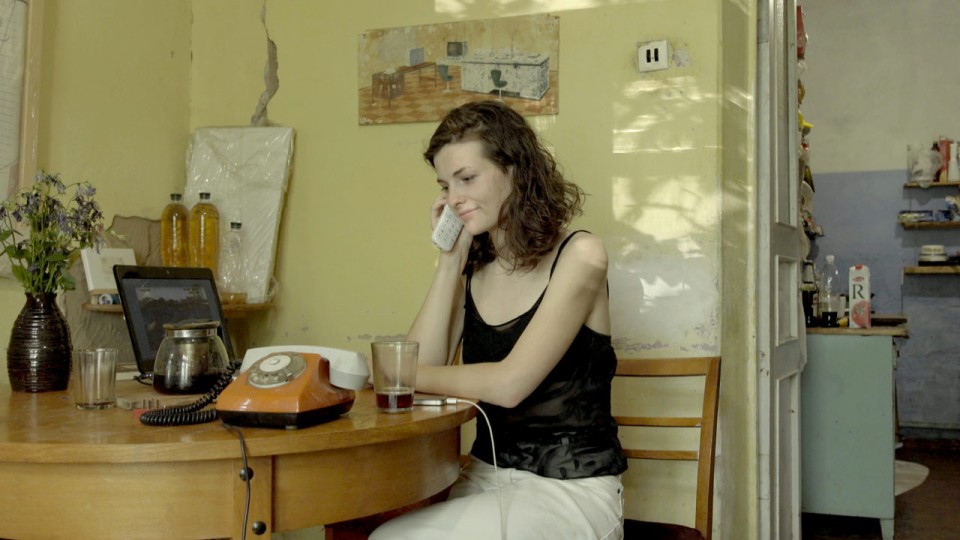 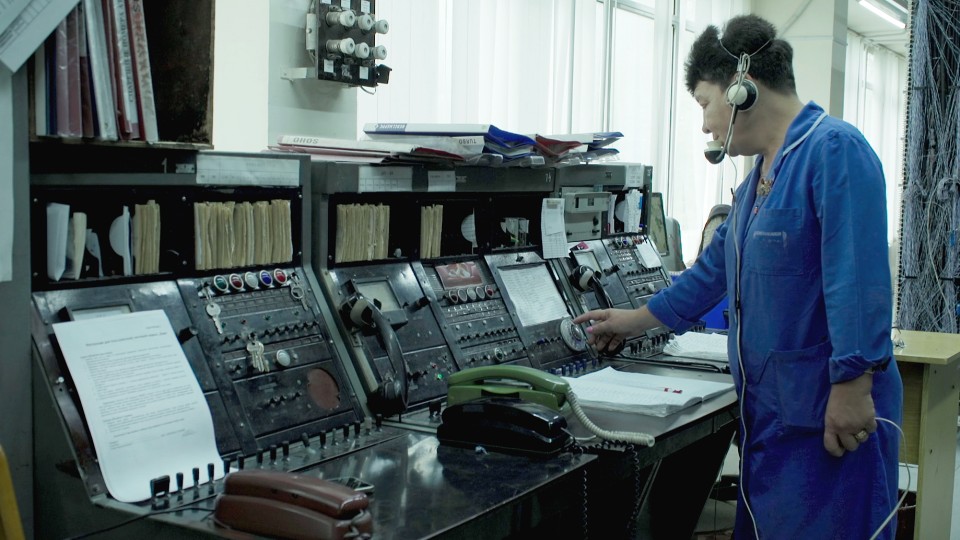 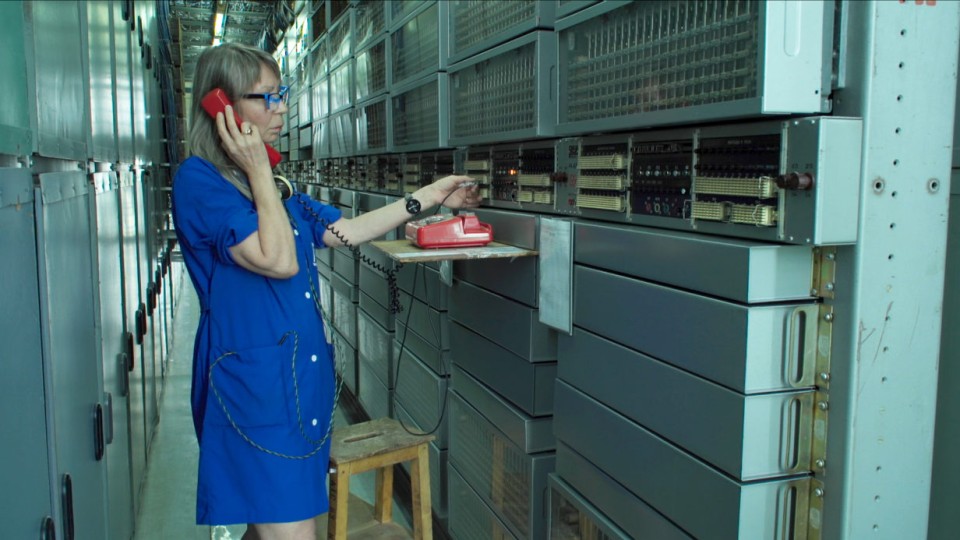 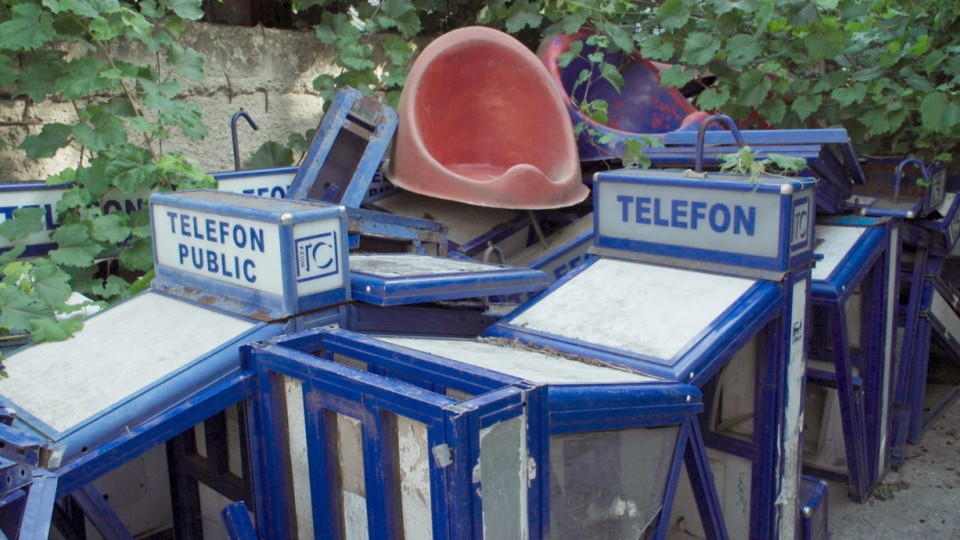 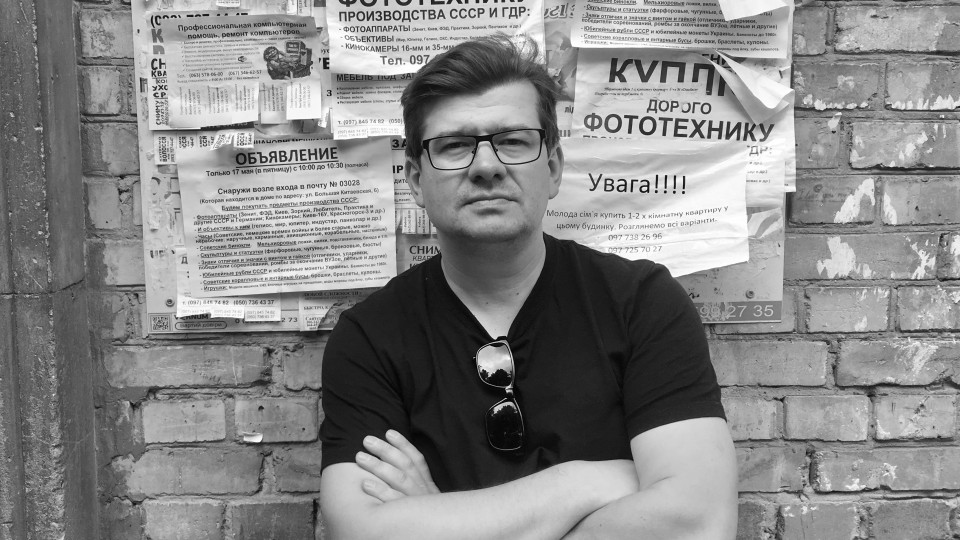 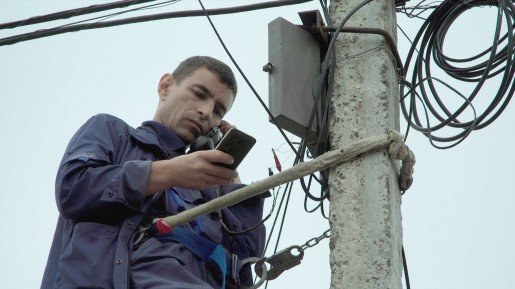 Special Mention to PLEASE HOLD THE LINE at the Astra FF

«I want to make it very clear that we are all equal and yet each person constitutes a world of his own, an individual planet. No matter what sophisticated means of communication are available, we continue to understand each other with great difficulty because everyone has their own perspective on life»